Racism and mental health: What We Know About How Racism Impacts Mental Health

Welcome to our Responding to Racism Blog. In this article we are discussing the effects of racism with the main focus on its impact on mental health.

Data from iReport.ie on racism in Ireland demonstrates the devastating impact racism can have on the lives of those targeted. Victims can suffer physically and psychologically, in addition to impacts on their working lives, finances and social connectedness. Institutions bear responsibility for upholding human and civil rights protections under the law, and while discriminatory practices and racially-motivated crimes are more likely to be prevented with effective hate crime legislation and critical oversight, our institutions must tackle the conditions which normalise racism by ensuring compliance with the law.


The Data On Racism and Mental Health

INAR’s 2019 Reports of Racism in Ireland reveal the highest number of violent racist assaults in the country to date, leading the EU with some of the worst rates of hate-motivated harassment (51 per cent vs 30 per cent average).

51 per cent of people of African descent in Ireland report facing racism in day-to-day life, while Travellers are dying by suicide at six times the national average. More accounts are now emerging detailing extensive anti-Asian xenophobia linked to the COVID-19 pandemic, while Ireland’s Muslim communities continue to report humiliation, fear and anxiety in response to ongoing Islamophobia.

US research suggests an emerging “racial battle fatigue” among African Americans in direct correlation to chronic encounters of racism and microaggressions. This results in anxiety, hyper-vigilance, blood pressure and cardiovascular irregularities and myriad other physiological symptoms of distress. Now, leading experts are arguing for the recognition and inclusion of racial trauma as a direct cause of PTSD in the American Diagnostic and Statistical Manual of Mental Disorders (DSM-5).

A range of global research, including iReport.ie data from 2013-2019, demonstrates the physical, mental, emotional and social effects of racism, listed in this infographic here: 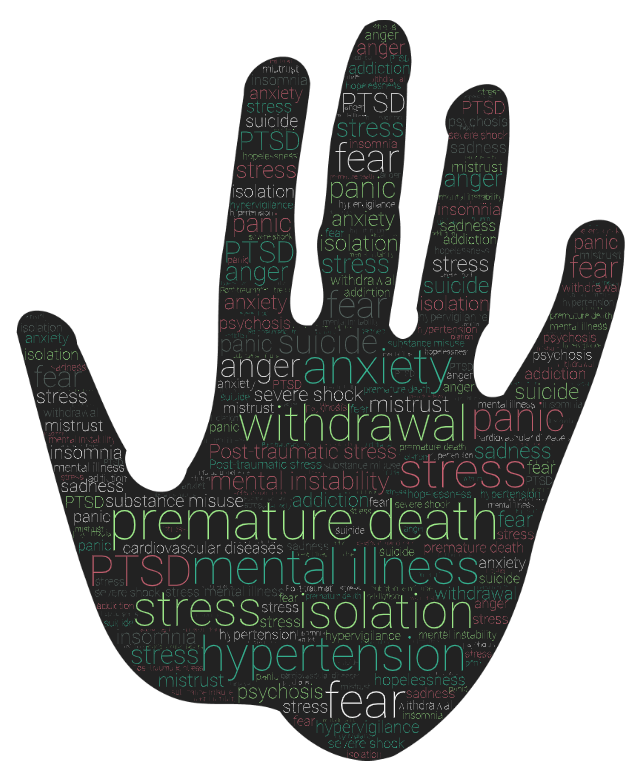 How the Impacts of Racism Intersect

From physical injury resulting from a violent attack to forcibly relocating to avoid threats to safety, the impacts of racism are multilayered and interconnected, affecting more than a person’s mental health. Racism can interfere with property ownership, daily routines, travel, work and careers, access to housing and other important facets of everyday life.


Racism, by its nature, can humiliate, dehumanise and attack the core of a person’s identity. It can undermine someone’s dignity, forcing them to change their usual behaviour and daily routines, such as avoiding familiar places or activities, travelling alone or changing traditional dress or religious symbols.

Racist incidents can also negatively impact the family, friends and communities of those targeted. It can cause feelings of low trust in others, including in an affected person’s area of residence, which can have significant consequences to the long-term cohesion and integration into community social life, especially in cases of repeated harassment, institutional racism and housing discrimination. Racist and discriminatory incidents can spread community-wide fear, especially when community leaders or authorities respond poorly. More widely, members of minority groups may come to believe that society accepts and supports racism, and that they are vulnerable to similar harassment and violence because of their identity. Across communities this can create more isolation, polarisation and social tension. These “ripple effects” of racist incidents have the impact of deepening social marginalisation and the internalisation of painful, traumatic experiences. Moreover, institutions, communities and leaders have key roles to play in responding appropriately to racist incidents so as to minimise the multiple and multi-layered effects of racism. 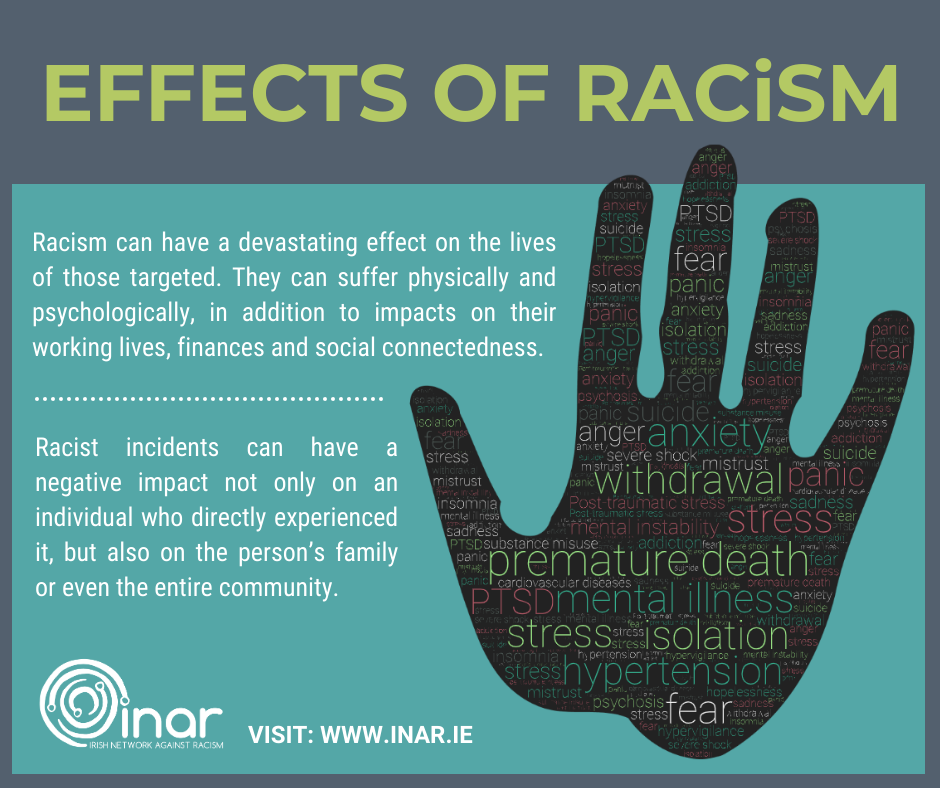 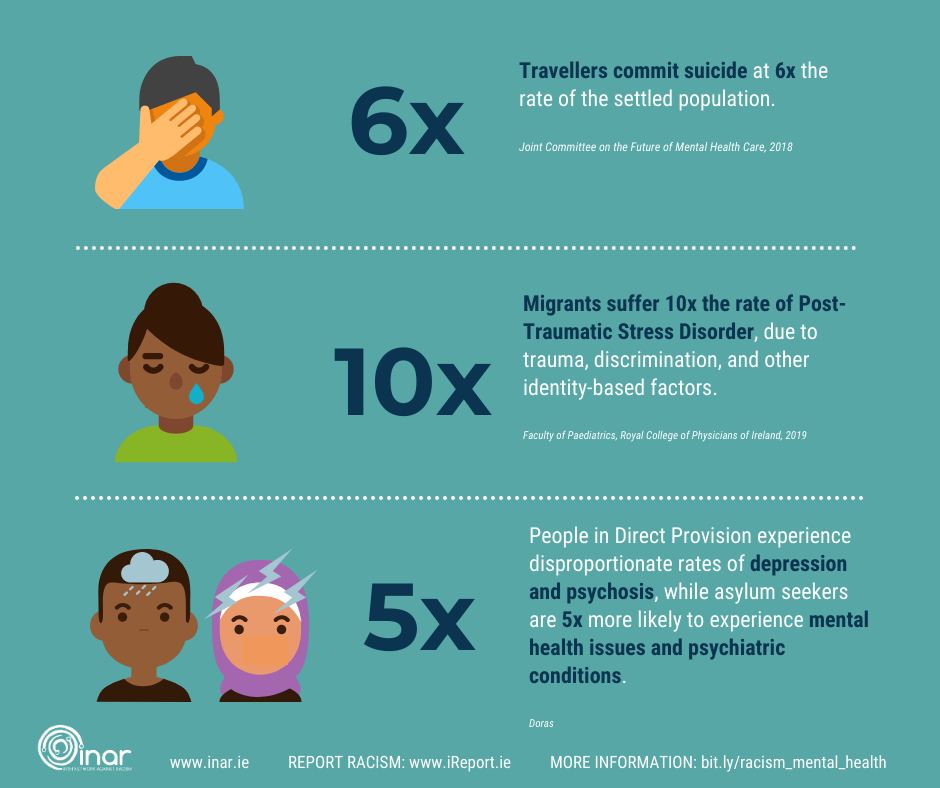 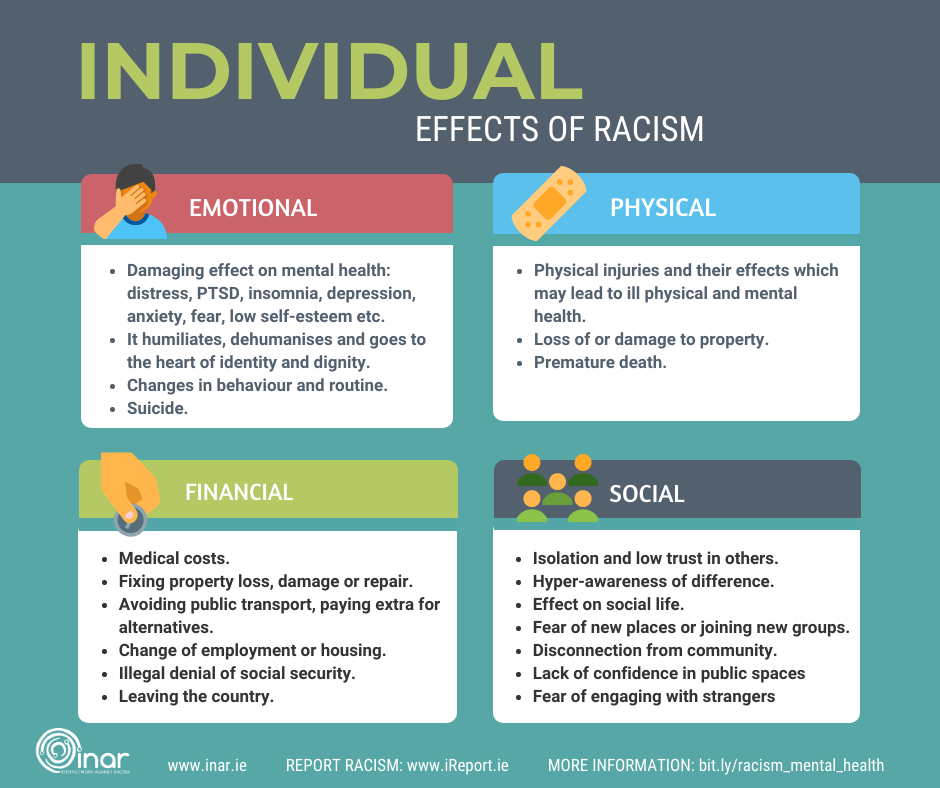 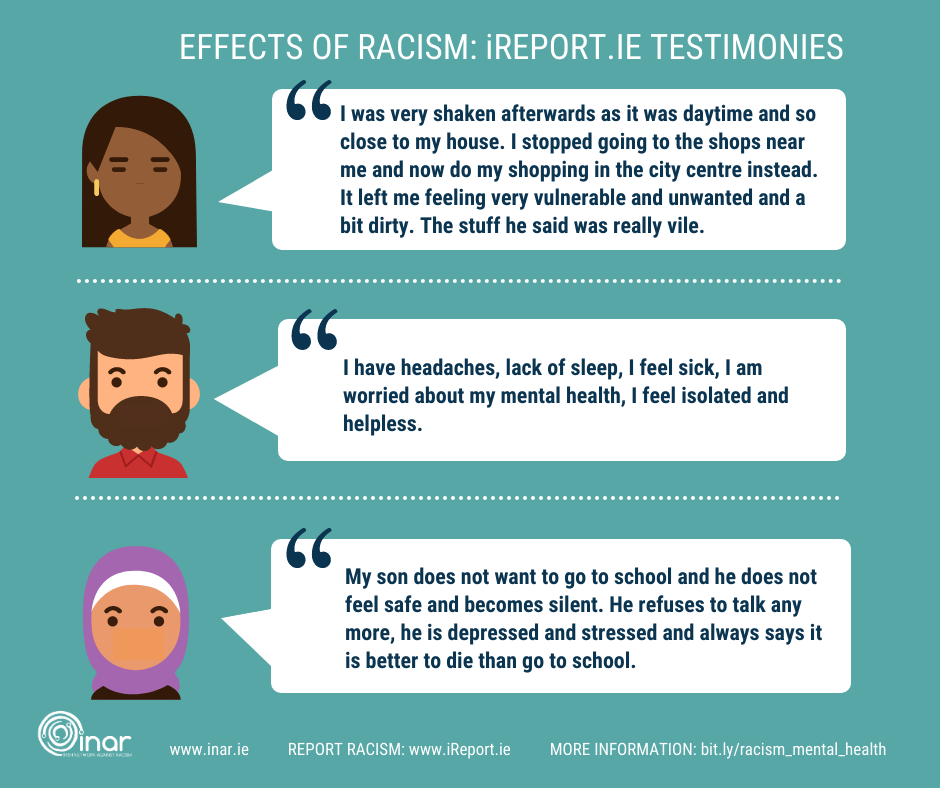 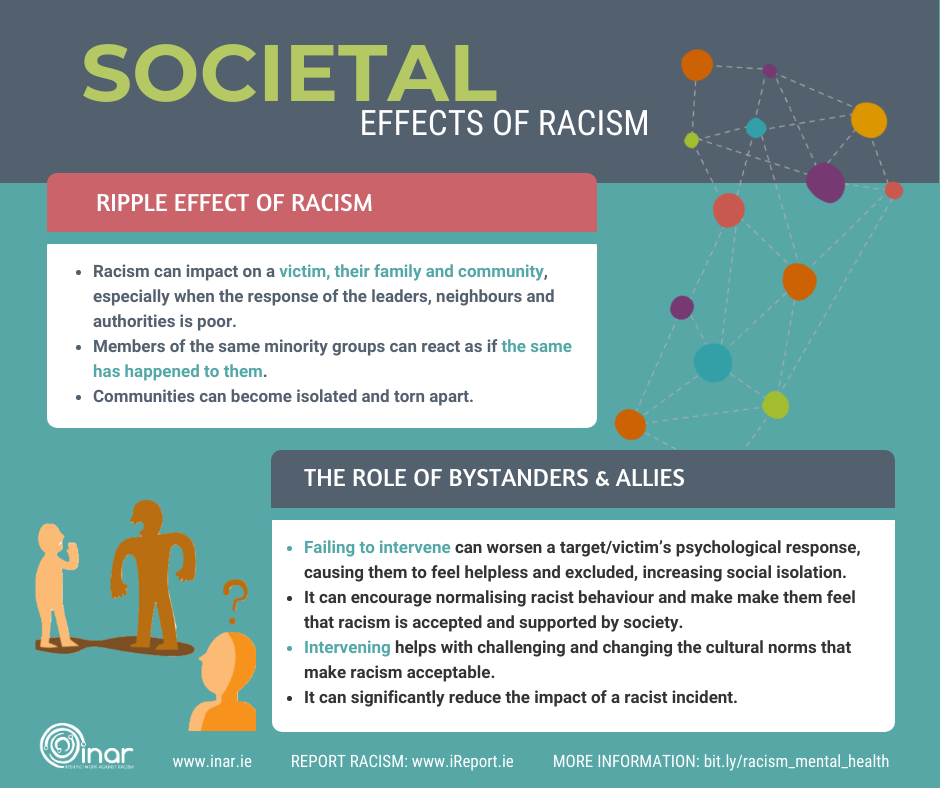 The Responsibility of Institutions to Prevent Racism

iReport.ie data shows that ethnic minority communities repeatedly confront racism with inadequate structural support and little recourse under the law.
It also shows that minorities frequently report mistrust and fear of not being taken seriously by An Garda Síochána, who, like all publicly funded bodies,  are bound by the Public Sector Human Rights and Equality Duty to carry out their functions without discrimination.

People held in Direct Provision centres experience disproportionate rates of depression and psychosis, while asylum seekers are five times more likely to experience mental health issues and psychiatric conditions. Migrants are also suffering 10 times the rate of post-traumatic stress disorder. Ultimately, discrimination and unjust living conditions are being compounded by the institutions responsible for ensuring their health and safety.

2019 iReport.ie data shows 31 cases of illegal discrimination in the public sector. Both Traveller and Roma groups confirm high levels of prejudice in the health sector, further deterring ethnic minorities from accessing mental health services when most in need.

The gap in the provision of culturally-sensitive health services means few mental health professionals are equipped to fully meet the health needs of patients from minority backgrounds. For these patients, the very problems resulting from structural and institutionalised racism can act as another barrier to equal access to healthcare, and further exacerbate unequal health outcomes.

While the Health Services Intercultural Guide, initially published in 2009, aims to promote culturally-competent care for an increasingly diverse population, more improvements are needed as racist incidents rise and the mental health consequences follow.

Unequal health outcomes for minorities may also be compounded by the additional challenges they face to accessing housing, employment, education and other basic needs.

iReport data highlights 32 cases of racist discrimination in the workplace during 2019. This involves racially-motivated practices including denial of work, bullying or harassment and other forms of racial abuse.  In 2018, Ireland had one of the highest levels of workplace discrimination in Europe, with a rate of 33 per cent, compared to an EU average of 22 per cent. Non-Irish Black people are five times more likely than white Irish people to experience discrimination when seeking employment. Discrimination also plays a significant role in the employment gap between the Traveller and Roma communities and the general population. Though the Employment Equality Acts outlaw discrimination on the basis of skin colour, ethnicity, nationality, religion and the membership of the Traveller community, their implementation requires stricter enforcement.

Why Institutional Change Is Needed

Ireland’s lack of hate crime legislation makes it an outlier within the EU. In keeping with good international practice and to comply with the Race Directive, Framework Decision on Racism and the Victim’s Directive, urgent government leadership is needed to introduce adequate standards of recording, investigation and prosecution, as well as victim support, as was also urged by the United Nations in 2019. However, effective hate crime legislation and changes to Garda practice alone, will not tackle the institutional and structural contexts within which hate crimes occur.

Institutional practices and cultures which tolerate discrimination foster environments where racist incidents, including bullying, harassment and racial violence and hate crime, can occur. Although the Equal Status Acts and Equality in Employment Acts outlaw discrimination on nine grounds, too few cases are brought under these acts on racist grounds, leaving practices unchecked. If an institution fails to mitigate the discriminatory practices which normalise racism, it is, in effect, institutionally racist. The Public Sector Human Rights and Equality Duty places an obligation on institutions to audit and monitor practices for their human rights and equality impacts. On a broader scale, society-wide measures to combat the root causes of racism in structural and institutional arrangements must be addressed through the implementation of a Durban Declaration-compliant National Action Plan Against Racism (NAPAR).

Become An Ally – Be Actively Anti-Racist

Effectively fighting racism also demands that bystanders show the same leadership we are asking our institutions: to become allies, cultivate a greater awareness of how deeply racism impacts ethnic minorities and actively drive solutions to build an anti-racist society for all.

Responding to Racism Guide: How to Report Racism and Where to Find Help is a guide for people who have experienced or witnessed racism, and/or those supporting them. The guide is packed with practical information on where and how to report a racist crime, discrimination, racism online and in the media and how to address and respond to it. The last chapter lists various organisations providing legal, emotional and specialised support for victims of racism. The Guide is accompanied by the Responding to Racism Blog providing information on responding to racism in an interactive, electronic format.

Pathways to Being Well. Mental Health Guide for Ethnic Minorities in Ireland is an informative guide on finding support when dealing with isolation or discrimination. Developed by Cairde.

What Is Counselling? Counselling provides a safe, confidential space for a person to discuss personal challenges while exploring better ways to confront problems and implement and manage lifestyle changes. Various types of counselling may include one-to-one counselling, family counselling, group counselling, couples counselling, psychotherapy and more. A family doctor can help determine the best option and how to access the appropriate services.

Watch: The Impact Of Racism Video

Speak Up on SPIN is a brand new content series by SPIN 1038 that aims to tackle important issues that exist in Irish society.

Speak Up on Spin: Racism is the first topic of the series developed in partnership with INAR, which brings a new informative video each week to educate the audience on different types of racism that occur every day, opening up real conversations to affect positive change.

The Impact of Racism is the third video of the series which focuses on the damaging effects of racism on people’s lives.

This article is part of INAR's Responding to Racism blog based on the Responding to Racism Guide: How to Report Racism and Where to Find Help. Articles collected in this blog aim to provide practical information and guidance on how to report and respond to racist incidents in Ireland. Articles range from information about what racism is, why and how to report it, to information on where to report racism depending on what actually happened, to bystander intervention techniques, responding to racism in a community and supports available to victims.

The longer-term goal is to develop these articles as a part of the national one-stop-shop online resource on reporting and responding to racism, easily available to anyone affected by racism in Ireland. We hope that the provided information will encourage readers to report racism and inspire them to re-think their role in addressing it. 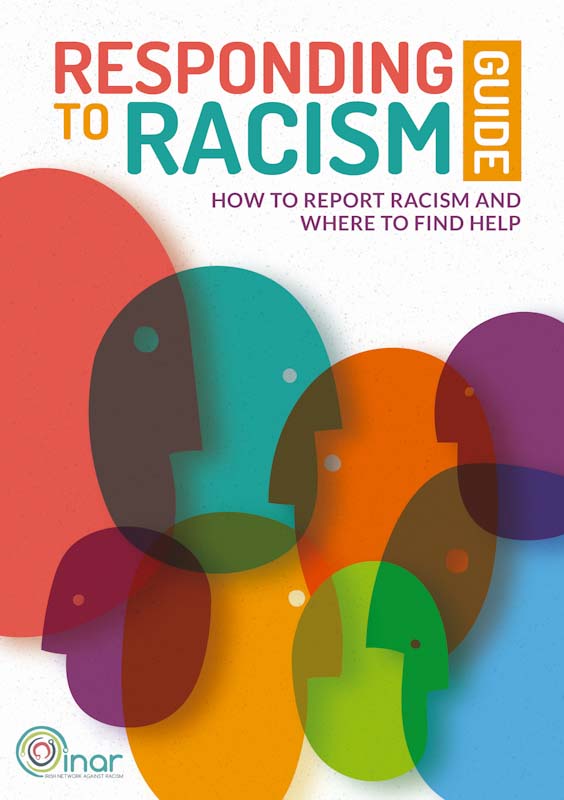