REPORTS of racism in Ireland 2020

2020 Reports of Racism in Ireland: Overview

The Report, video and all resources on this page have been produced as part of the project FACTS AGAINST HATE, supported by the Rights, Equality and Citizenship (REC) Programme of the European Union (2014-2020). The contents of this page are the sole responsibility of INAR and the Facts Against Hate Project and can in no way be taken to reflect the views of the European Union.

2020 will be remembered as the year of the Covid pandemic, and for the up-ending of our ‘normal’ working, school and day-to-day lives. For minorities in Ireland, it was the same and more. Globally, the pandemic threw into sharp contrast the contours of structural racism and discrimination. Data from the UK and the US showed how ethnic minorities and migrants are more susceptible to infection, and experience poorer outcomes from treatment, including suffering higher mortality rates. The structural bases for these disparities are evident in Ireland in the overrepresentation of minorities in healthcare and other frontline roles, in the notorious conditions in Direct Provision centres, in the accommodation conditions which make Travellers, Roma and migrants more exposed to infection, in the conditions in food factories where minorities and migrants are overrepresented, and in the unequal access to healthcare, social welfare and workplace safety protections facing all minorities.

In 2019 we had reported on the conditions which made racialised commentary rewarding for public figures. In February 2020, 34 reports were made relating to maverick billionaire Michael O’Leary’s pugnacious comments calling for the profiling of Muslims, and the toxic outpourings which followed. Racist abuses and discriminatory behaviour thrived in the pandemic, their expression adapting to new conditions and developments, but also opening new opportunities for pushback. Chinese people, Asians and minorities in general, became more conspicuous to attackers, both online and offline in some high profile hate crimes, with perpetrators often blaming their victims for the pandemic. 31 of the hate speech reports related directly to the pandemic.

Six years into the UN Decade of People of African Descent (UNIDPAD), and five years after the publication of INAR’s Afrophobia in Ireland, the global wave of horror at the police killing of George Floyd washed over Ireland, resonating with black Irish experiences on the ground; years of ongoing reports of racist violence and discrimination, and in 2020, more incidents of racial profiling and an emerging new trend in reports of failures to act and of poor treatment by Gardaí. Against this background, events in the US sparked a younger generation of Irish minority activists to leapfrog old leaderships in anti-racism, organise their own rallies and use their own voice to proclaim: “ Black Lives Matter!”

If the lockdown and associated closures saw modest decreases in incidences of direct discrimination and racism in institutions (with the highest decrease in reports relating to public servants), and on-the-street racism, the trend had been sharply upwards in the first quarter, and their subsequent decrease much less than might have been expected, resulting in a record high for recorded assaults (51 this period compared to 50 in 2019). In addition to the BLM wave, minorities also experienced a reactionary backlash fashioned in the US; Irish far-right actors imported conspiracy theories about Covid to activate their followers and incited violence through the exploitation of racist myths. In this period, a record 69 reports concerned incitement to hatred by far-right hate groups. Among these, a number of Irish far-right scammers who have become adept at inciting hatred against whole groups, and sometimes named individuals, while skilfully navigating Irish law and social media platforms’ “community standards”, have contributed significantly both to online toxicity and fake news, and to the new phenomenon of conspiracy-theory informed anti-mask and covid denial protests.

Perhaps unsurprisingly, the biggest growth in reports related to online racism. These can be seen on social media platforms, on the Facebook pages of established broadcast and print media, and in the growing number of fake news stories emanating from the web of “journalistic” outlets which contribute to the increasingly sophisticated far-right ecosphere. Media and social media incidents accounted for 334 reports in this period, compared to 174 in 2019, with Facebook, whose business model incentivises salacious content, as the number one culprit (119). A total of 56 reports related to a fake news story circulating widely which falsely alleged that a Romanian haulage company was trafficking stolen goods. The Irish far-right fake news industry came into its own in August when a planted manufactured story falsely blaming African youth for starting a house fire in Balbriggan, Co Dublin went viral. It would rear its ugly head again with the manufacture of dehumanising disinformation about 27 years old George Nkencho, a black man who had been suffering a mental distress episode when he was shot dead by the Garda Armed Support Unit on December 30. The disinformation rapidly gained traction, undermining wider community sympathy for Nkencho and his family and stoking community tensions. A Garda statement some days later helped ease tensions. Although symbolic of promising changes in police policies and practice, such measures are often criticised for being ‘too little, too late’. Work has begun with the Government on a National Action Plan Against Racism (NAPAR), as required by the UN. A NAPAR holds the promise of being able to deploy the resources of the state to tackle racism at a systemic level and in all the areas it is reproduced. Whether we succeed in developing such a NAPAR is a question of political will and resourcing. 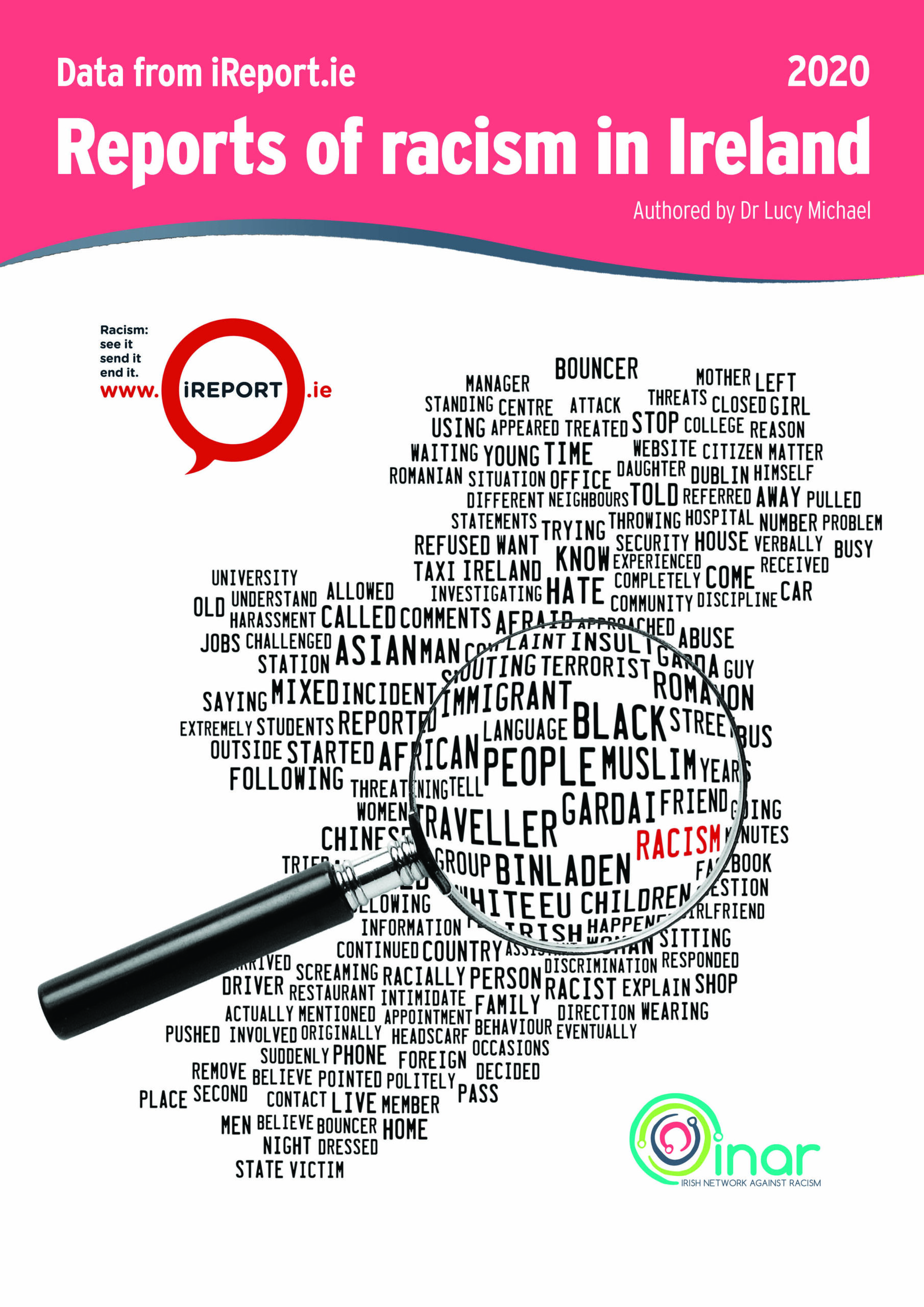 Reports of Racism in Ireland: Infographics 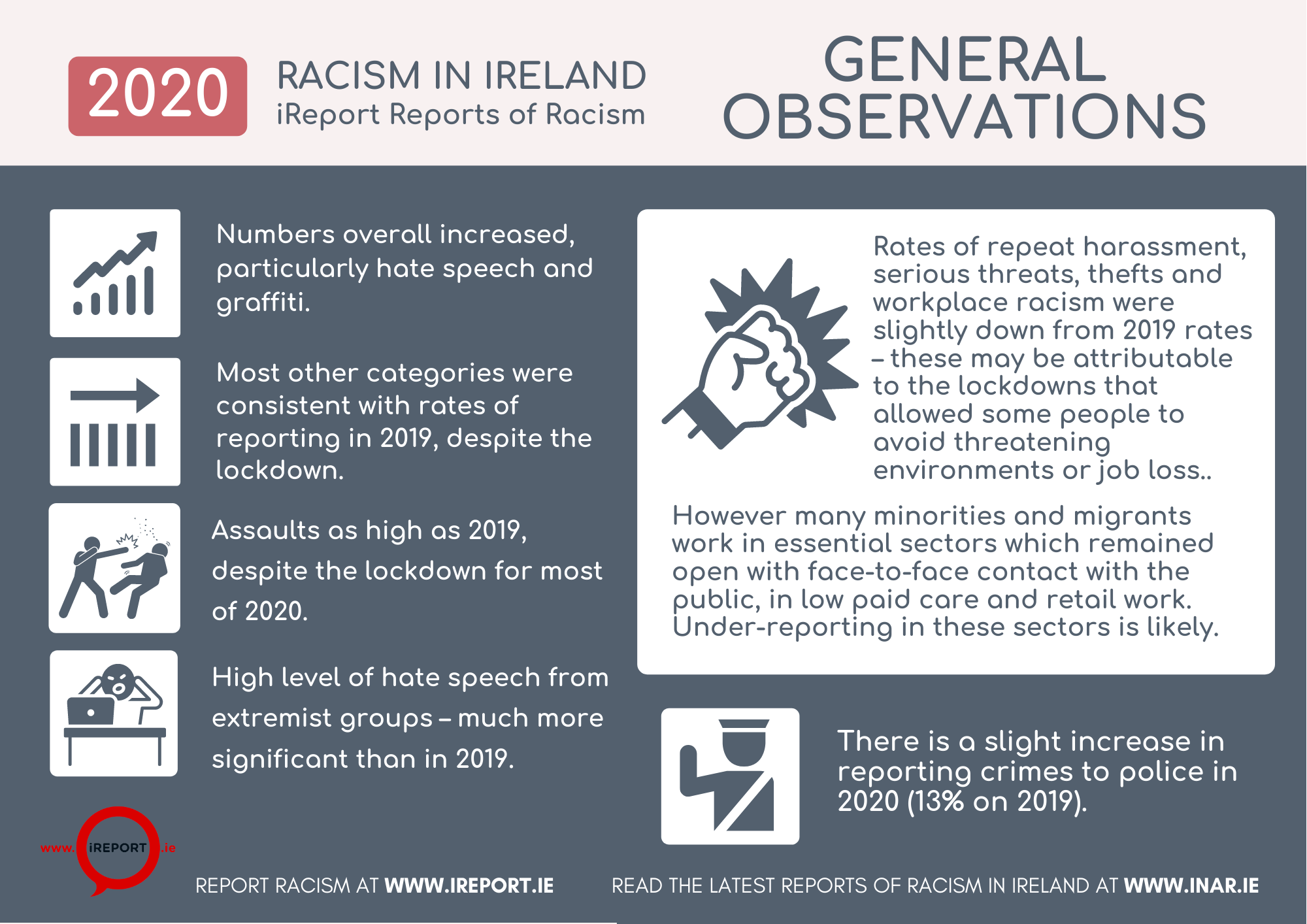 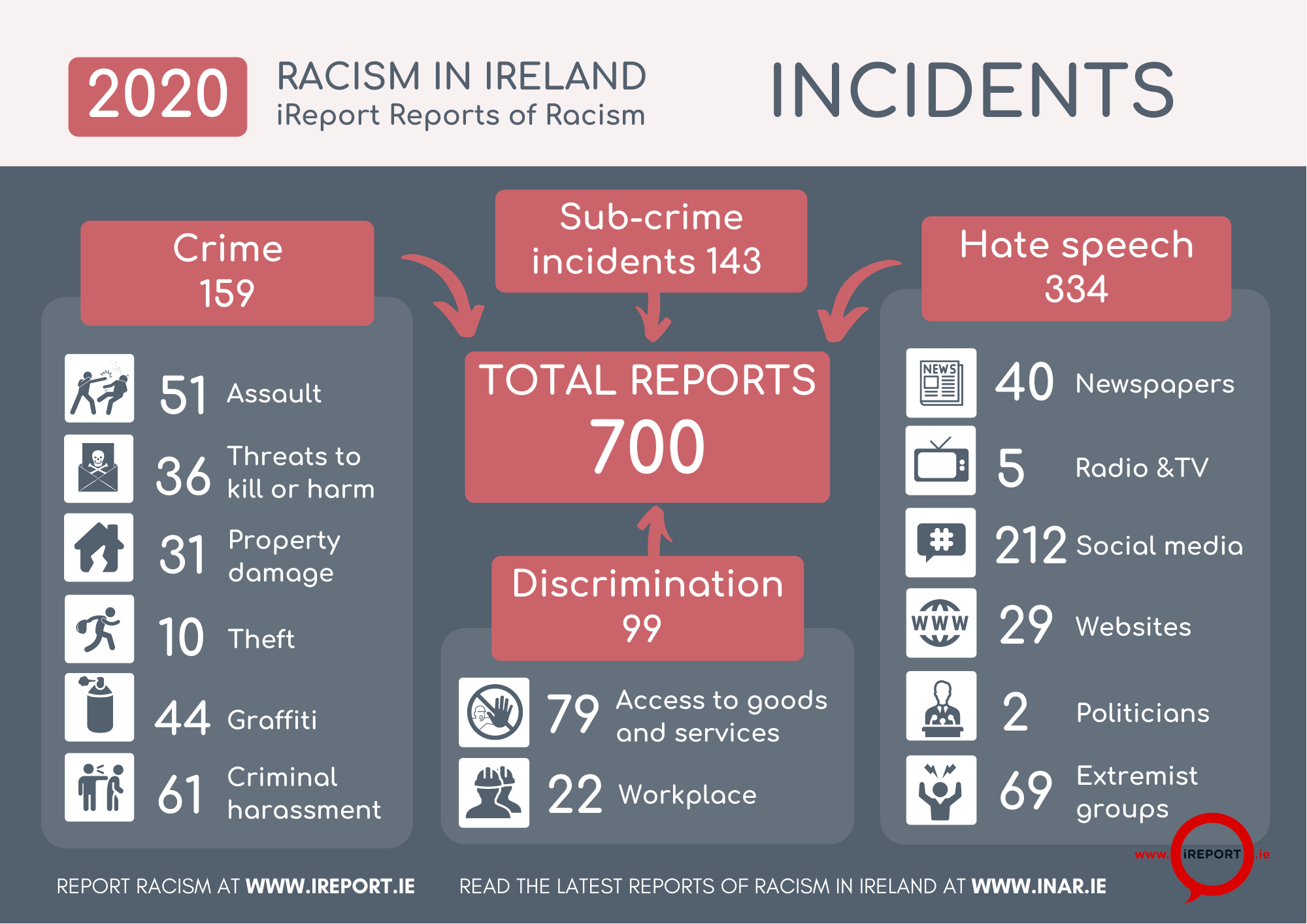 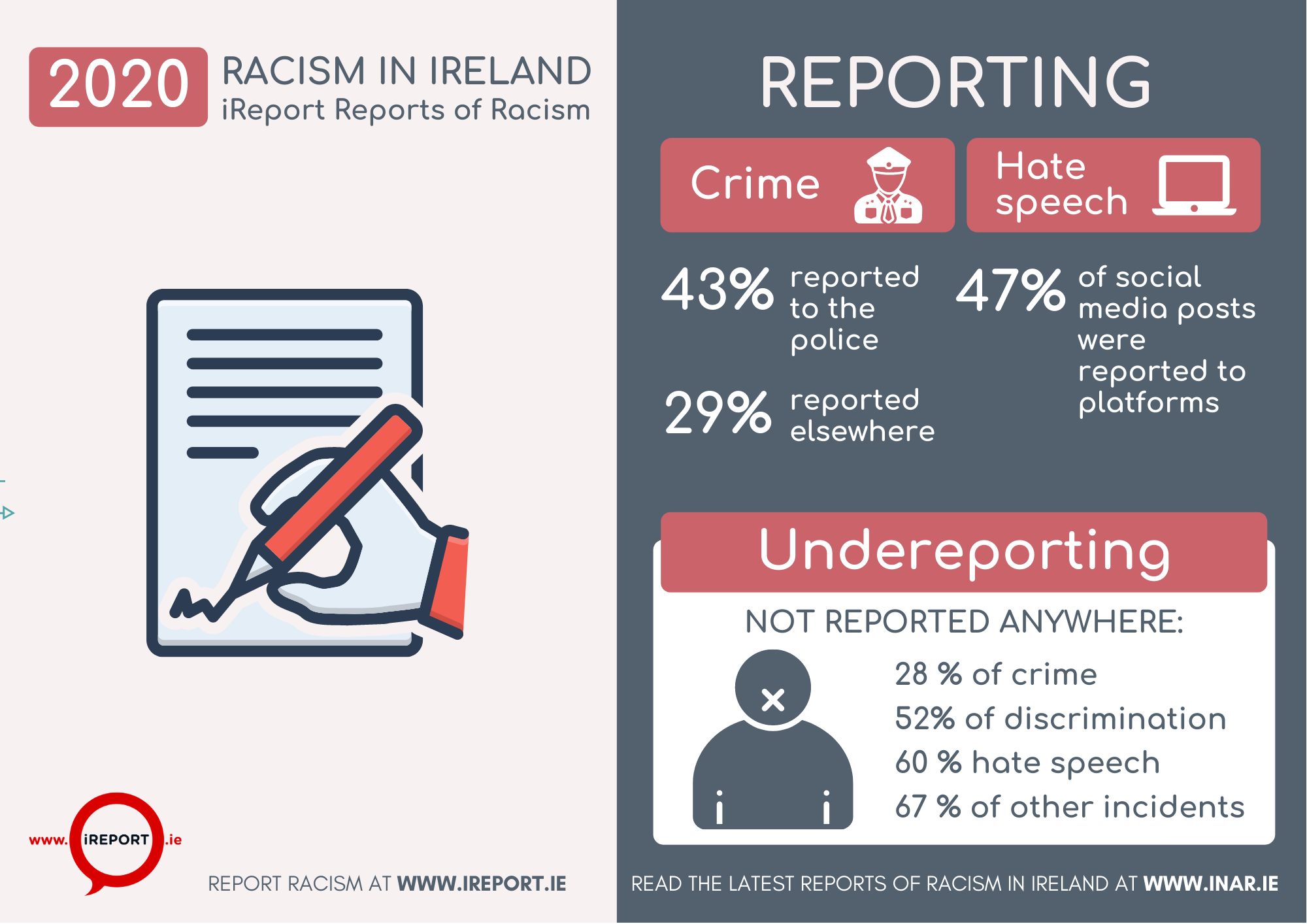 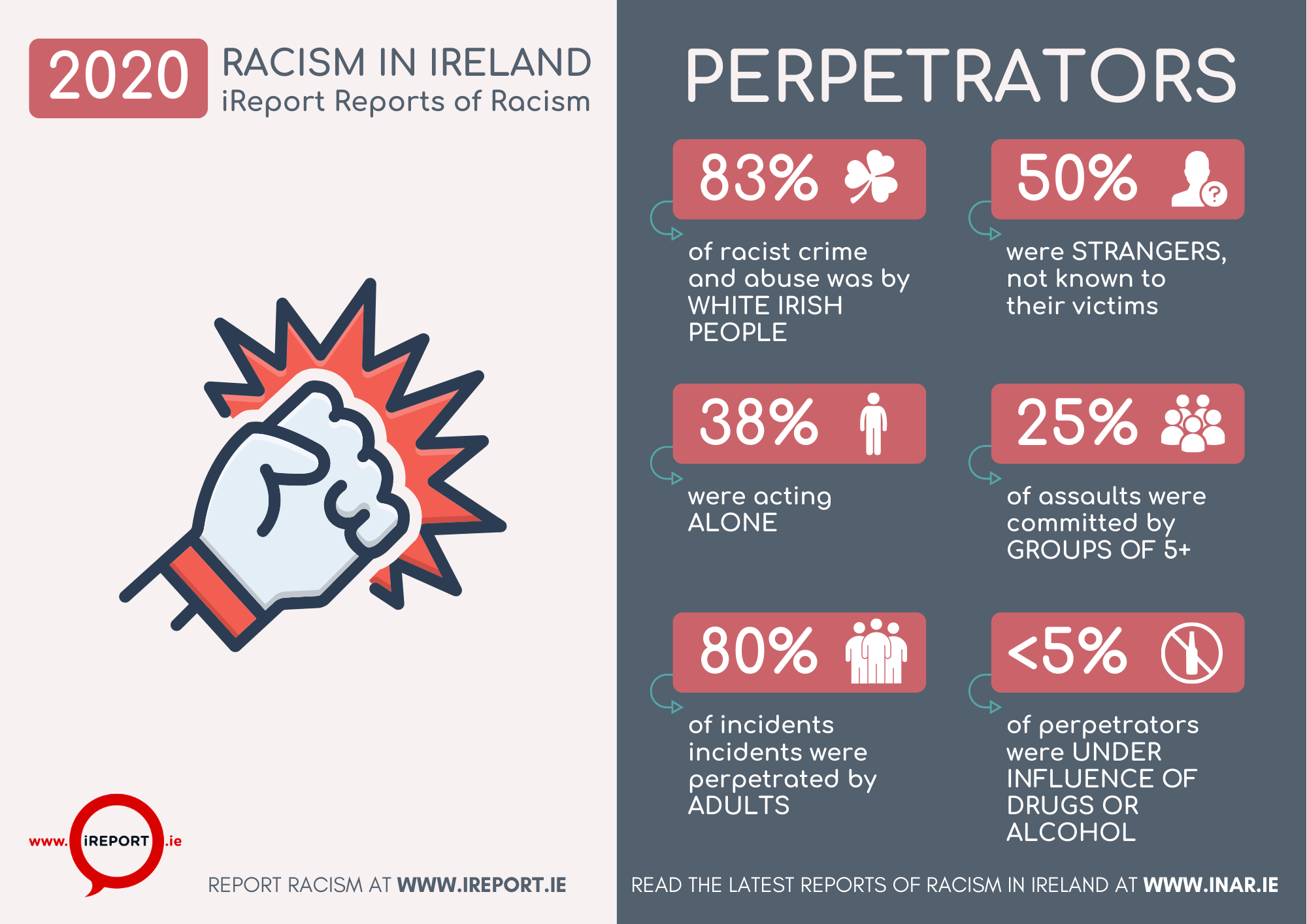 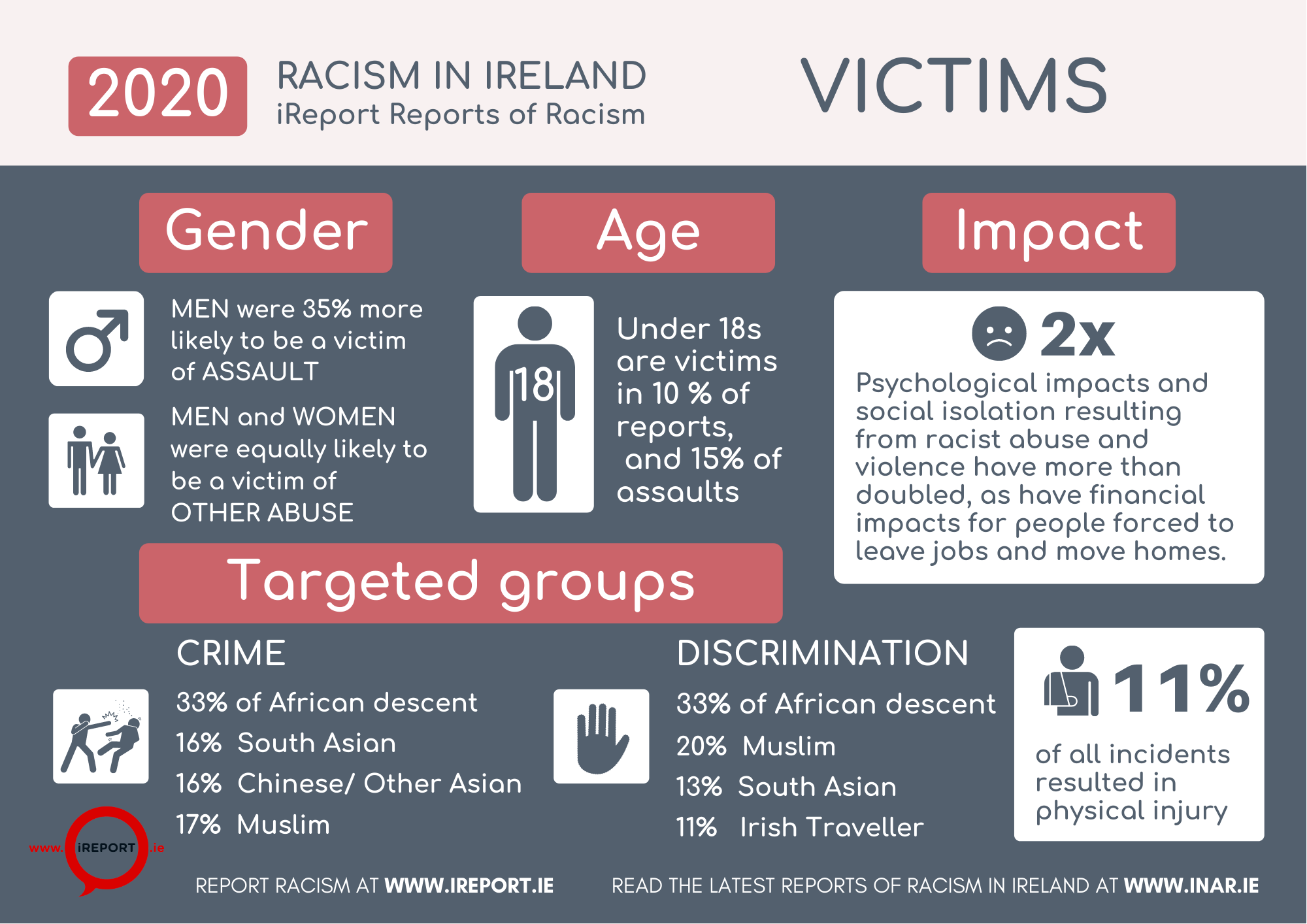 All the resources on this page have been produced as part of the project FACTS AGAINST HATE, supported by the Rights, Equality and Citizenship (REC) Programme of the European Union (2014-2020). The contents of this page are the sole responsibility of INAR and the Facts Against Hate Project and can in no way be taken to reflect the views of the European Union.