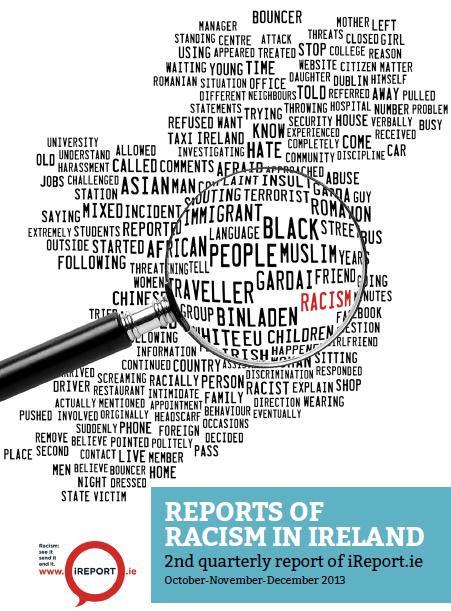 “Manifestations of hate speech and other forms of racism on social media are disturbingly extreme”,  said Shane O’Curry, Director of INAR. “The latest Quarterly report on racism details a variety of online incidents ranging from racist name-calling and stereotyping; to threats of violence; to death threats; to expressions of sentiments that can only be described as genocidal”.

“The Internet is an easy place for people to say things that would otherwise be less socially acceptable to say”, said the Director. “Taken with the lack of legal recourses available, and the poor record of self-regulation by social media platforms, this creates the conditions in which “keyboard warriors” can work-up base racist sentiments into something much more sinister and threatening for those on the receiving end.“

He said, “INAR has tried to take a test complaint to Gardaí, based on a report of racist abuse against footballer Stan Collymore, which originated in Ireland, but,  this has proven difficult to pursue.  If it is difficult enough to tackle “ordinary” hate speech under he grossly inadequate Incitement to Hatred Act, online hatred is happening with almost total impunity.  The government needs to prioritise the issue of online hatred, bullying and death threats .“

INAR’s Quarterly Reports have attracted European-level attention and are being cited as best practise by the Fundamental Rights Agency, as well as the European Network Against Racism and the United Nations Committee for the Elimination of Racial Discrimination (UNCERD).
“iReport.ie is very well done. It gives a thorough insight into the current situation and challenges and on top of that it is well written and accessible. I look forward to see how the project develops further and seeing its impact. FRA considers making a good-practice-box about the report in the up-coming annual report together with a similar initiative in Greece”, said Morten KJAERUM, Director of the European Union Agency for Fundamental Rights (FRA)

https://drive.google.com/folderview?id=0ByOePHvc_ZsucDRkUm5OVlRpMUk&usp=sharing
~          Other key findings include:

* Black Africans are the most likely to be reported victims of public racism.
* Most incidents occur during the day.
* Disability, gender and sexual identity also have impacts
* Reports were primarily made by third party bystanders
*Several reports were made of incidents involving spitting.
*The report also details the Press Ombudsman’s findings against an ‘Irish Independent’ article for
‘Prejudice’.
~          iReport.ie was launched on 11th July 2013. This second Quarterly Report, iReport Q2 2014, covers the period 1 October 2013 to 31 December 2013. The iReport is a human rights monitoring tool, which takes the form of quarterly and yearly observations on racist incidents in Ireland. The iReport observatory compiles its data from information submitted by people who have been subjected to racism, by frontline antiracist organisations and other organisations that are committed to combating racism, and by the public. It uses iReport.ie, an online racist incident reporting system, which can be found at www.iReport.ie
~          iReport.ie and the iReport are managed by INAR, which coordinates a network of over 30 civil society organisations in Ireland working in anti-racism. INAR is a part of ENAR, the European Network Against Racism. INAR and ENAR work to coordinate common civil society led responses to racism and racial discrimination at a local, national and European level. Irish Network Against Racism  (INAR) used to be called ENAR, the European Network Against Racism.
~          To ensure the analysis of the iReport reporting system is in line with robust international standards of data collection and analysis INAR has partnered with Dr Lucy Michael, Lecturer in Criminology at the University of Hull. Dr Michael is an authority on hate crime recording systems and on the impact of hate crimes on communities. She is the author of several works in the area including ‘Hate Crimes against Students’ (2013) and ‘Securing civic relations in the multicultural city’ (2009). She is a member of the British Society of Criminology and an Executive Committee member of the Sociological Association of Ireland and the UK Editor of the Irish Journal of Sociolology.