On Thursday, 21st March, Senator Colette Kelleher re-launched ENAR Ireland’s Anti-Racism Election Protocol 2019 (AREP 19) in the AV Room in Leinster House. The launch was held on the International Day for the Elimination of Racial Discrimination, which this year focused on mitigating and countering rising nationalist populism and extreme supremacist ideologies. It has particular relevance in the context of the increase in racist discourse and the rise of xenophobic populism in Ireland and globally. We hope with this protocol to help keep the May 24 local and European elections free from the kind of toxic discourse that misinforms voters and debases political debate.

The Anti-Racism Election Protocol has played an important role since 2001 in ensuring that elections have been conducted in such a way that they do not incite hatred or prejudice on the grounds of ‘race’, colour, nationality or ethnic origin, religious belief and membership of the Traveller Community.

Political parties that have previously endorsed the Protocol included: Fine Gael, Fianna Fáil, Sinn Féin, Labour, Solidarity-PBP, the Green Party and the Workers’ Party. Many independents and individual candidates have signed it too. 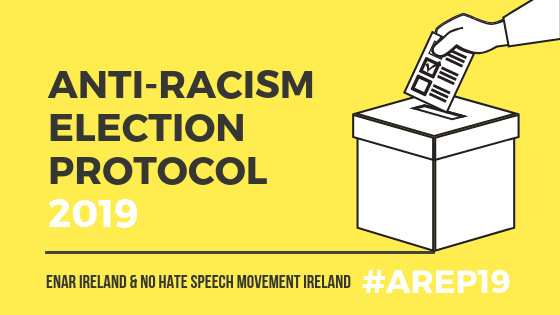 INAR invites political representatives to demonstrate their commitment to anti-racism by signing the below declaration as an indication of their support and endorsement of the Protocol.

DECLARATION OF INTENT BY POLITICAL PARTIES AND/OR INDEPENDENT AND INDIVIDUAL CANDIDATES:

As a candidate/authorised rep of a political party in the 2019 local and European elections, I agree:

To send a consistent and clear message to my constituents that I reject racism and all forms of discrimination and hate speech.

To condemn any campaign materials or statements that may incite hatred or express prejudice on the grounds of ‘race’, colour, nationality or origin, ethnic background, religious belief, or membership of the Traveller Community.

To guarantee that when engaging in ongoing debate in relation to groups which are the potential targets of racism, including asylum seekers, refugees, migrants, people of African or Asian origin, people of Jewish faith, Muslims, Roma and Travellers, my contribution to such debate is conducted in a responsible way and with respect for the dignity and rights of all members of the human race.

To use appropriate and inclusive language and words when referring to people of different ethnic and religious backgrounds, in order to avoid stereotyping, prejudice or confusion.

To endeavour to use images in my election material that reflects the diversity of our society.

To inform all my political campaigners about the intent and contents of this Protocol.

To inform my/our constituents that I have signed up to this Protocol and endorse the No Hate Speech Movement.

Apart from the national launch in Dublin local events were organised in Galway, Waterford, Donegal, Limerick and Wicklow. 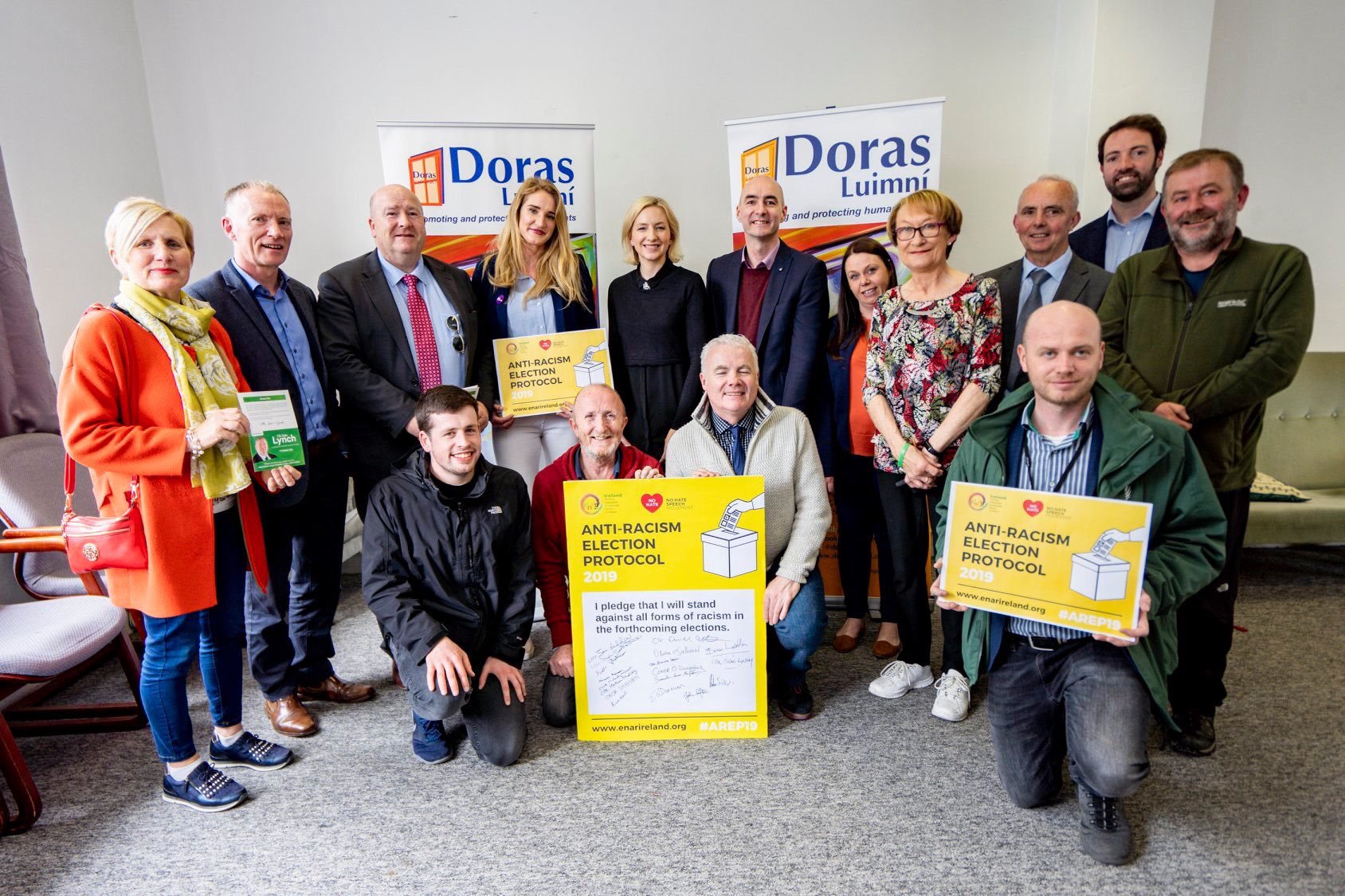 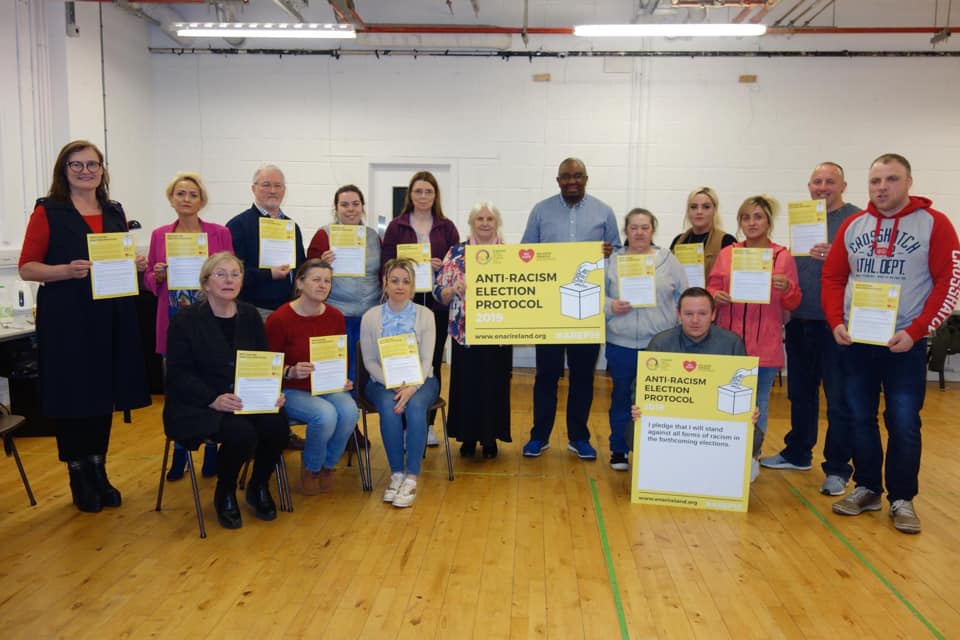 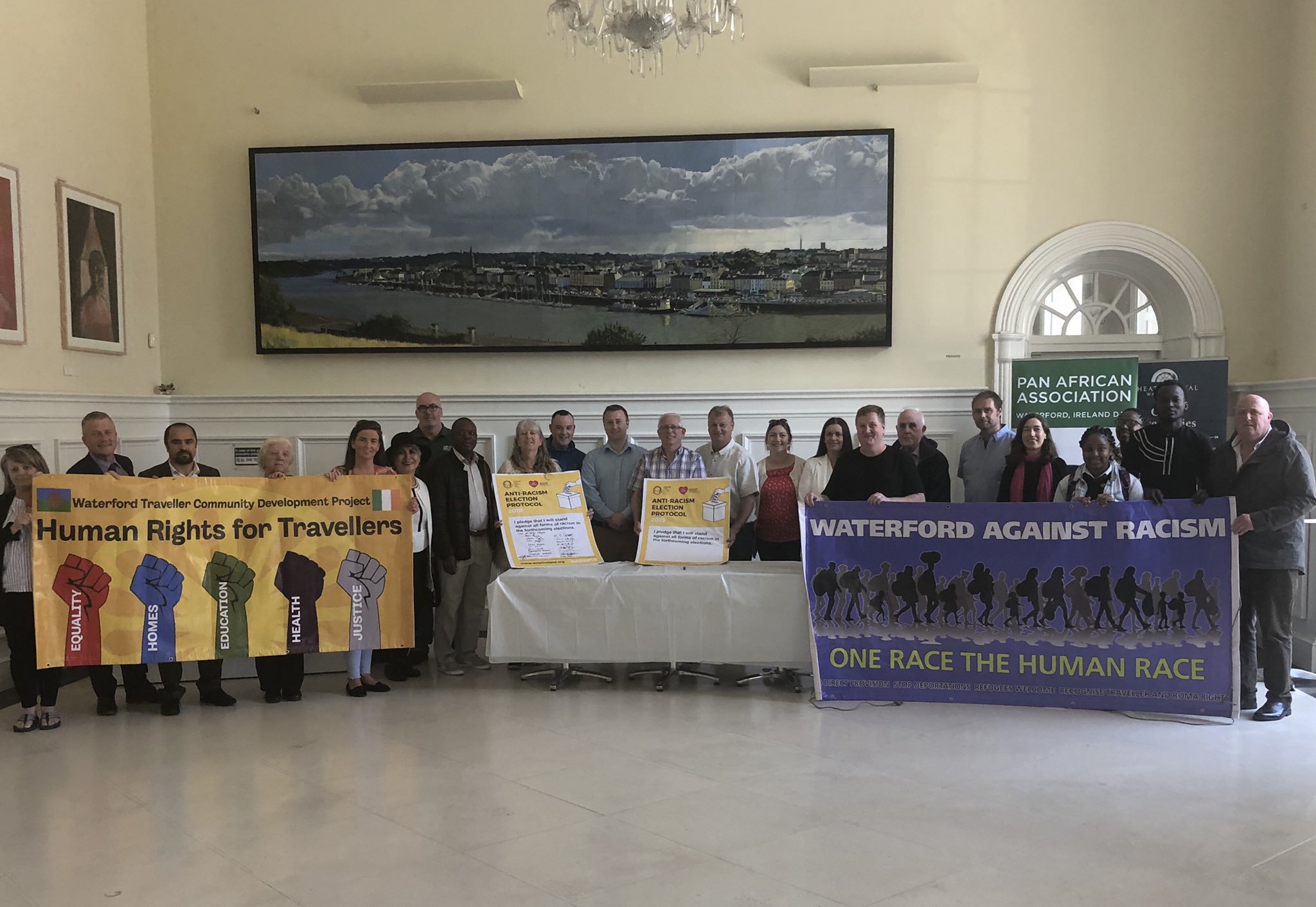 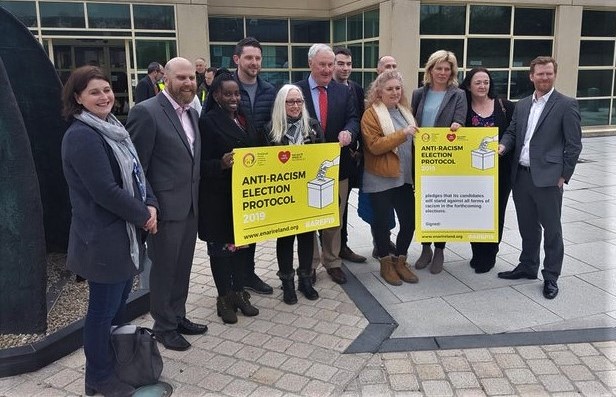 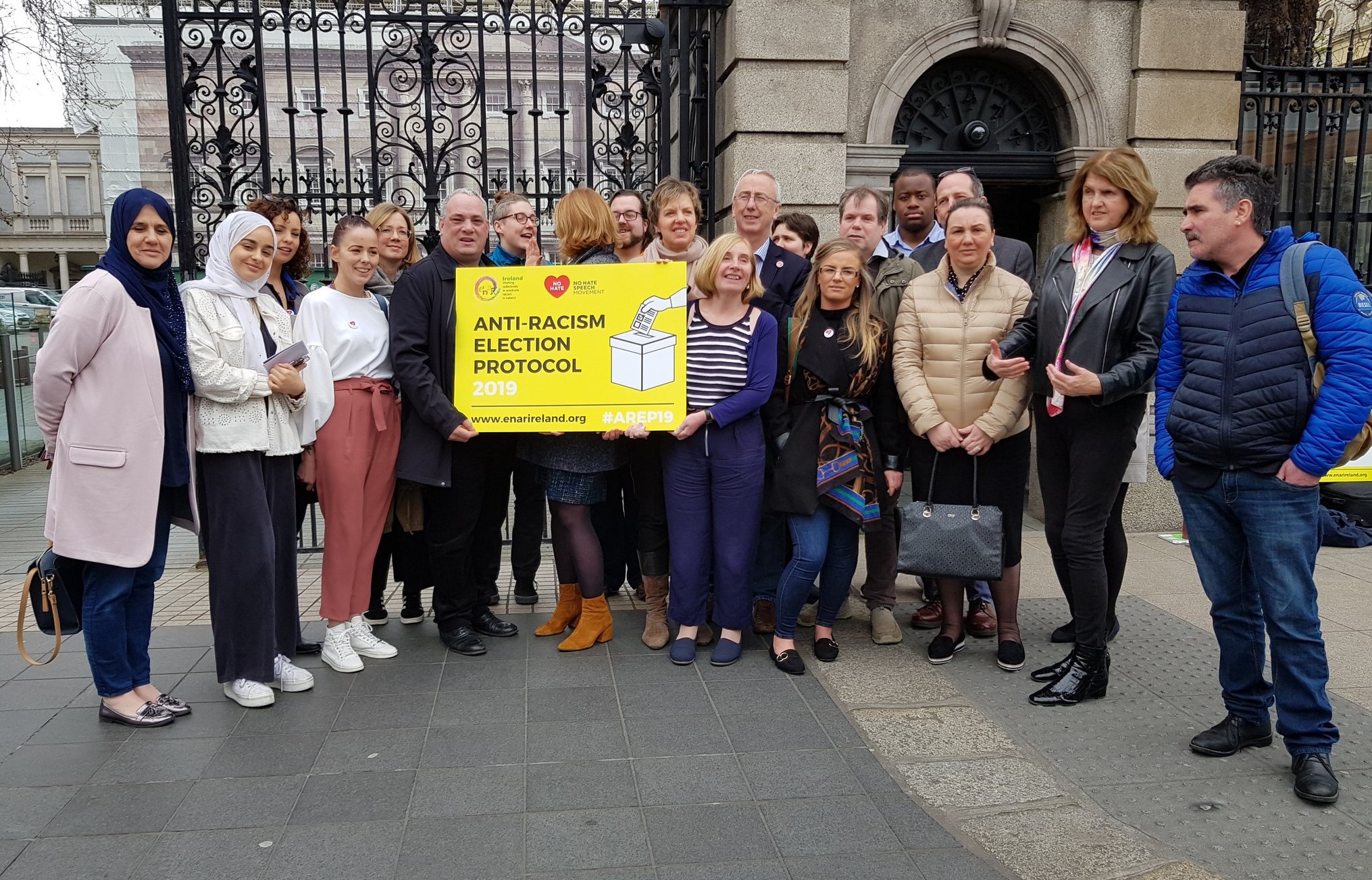 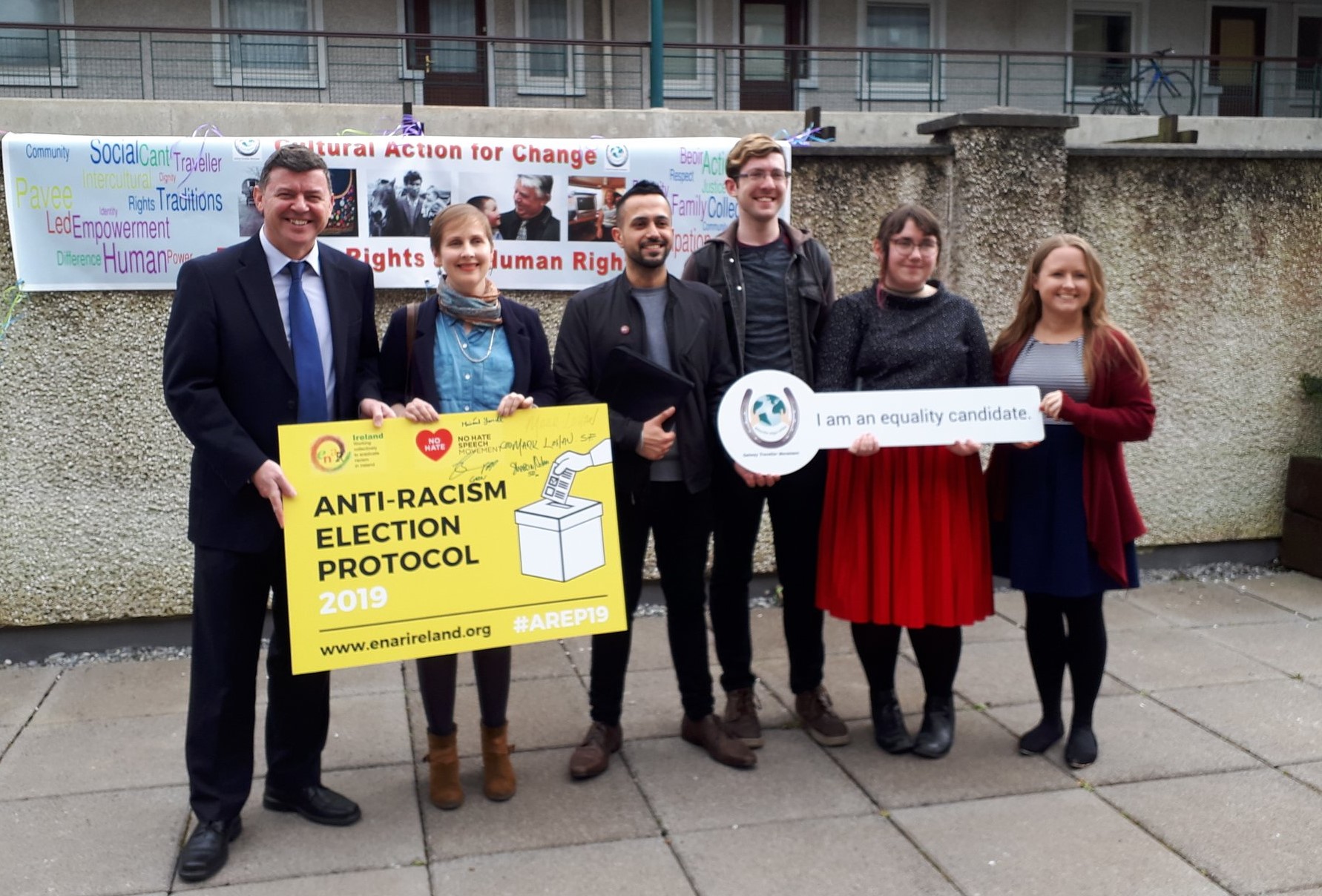 We are encouraging constituents to ask canvassing politicians if they have committed to the Anti-racism Election Protocol 2019.