INAR’s submission to the Oireachtas on Integration, Multiculturalism and Combating Racism 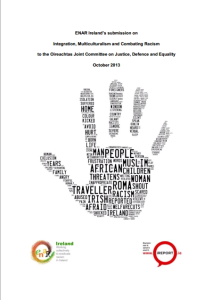 Click to read INAR’s submission to the Oireachtas on Integration, Multiculturalism and Combating Racism

Executive Summary
INAR is a national network of NGOs and community organisations which works at both a National and European level to combat racism. It uses iReport.ie and a range of other measures and instruments to monitor racism, influence debate and make policy recommendations for positive change locally, nationally and in Europe.

There is currently a policy vacuum on racism and xenophobia in Ireland, at the same time, racism is a far greater problem than is acknowledged. There is not enough data on racism and discrimination, due to under reporting and insufficient resourcing for monitoring.

Racism occurs at 3 interlocking levels; personal, structural and institutional. INAR and its membership favour an approach to tackling and monitoring these interlocking levels of racism through a coordinated approach, which is comprehensive, systematic and holistic, and uses a wide range of measures and instruments. These measures are set out under the headings: Institutions, Legislation, Policy and Practice. These measures ought to be coordinated as part of a renewed National Action Plan Against Racism and would include the following recommended changes: