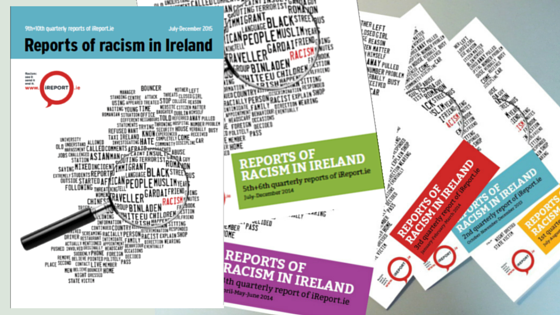 A total of 165 reports of racism were received through iReport.ie in this six month period, representing a slightly higher level of reporting than previous periods. 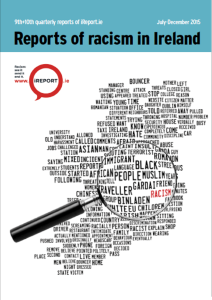 Distinct analysis on each of the above incidents is offered in the report.

This period highlighted some notable aspects of the data. More discrimination was evident in the course of statutory business by public servants, and in public buildings. Businesses were revealed to be explicitly exercising policies which excluded specific ethnic groups, and asking their staff to enforce these. And, in keeping with the belief in impunity suggested by the above, racist harassment and incitement to hatred are being perpetrated quite openly on social media and in the mainstream media by people easily identified as public servants or businesses, and who appear to believe there are no consequences to racist behaviour in these forums. Together, these flag a serious need for strong political leadership against racism and effective mechanisms to prevent cultures of impunity emerging.
There is evidence of low levels of trust in Gardai to attend all kinds of incidents in a timely manner, and to pursue an investigation. Concerns on the part of victims for follow-up suggest that Gardai could increase levels of trust significantly by addressing the way in which communications with victims of racist incidents are organised. Concerns on the part of victims for prompt communication appear to be driven by the desire for information about their ongoing safety rather than punitive interests, and therefore communication strategies which address safety concerns in a timely manner may gain some ground over an approach which emphasises the formal stages of investigation.
The reports showed the highest rate of assault for a six-month period since iReport.ie began in 2013. It is concerning that less than half of incidents we categorised as crimes were reported to Gardai, and even more concerning that threat, assault without injury, harassment and sexual harassment were considered by victims to be “too common” to report. Urgent action needs to be taken to communicate that racist incidents are taken seriously by An Garda Siochána, and that officers are equipped to deal appropriately with crimes with a racist motive.
The impact of events can be ameliorated or exaggerated by the actions taken by bystanders during or after an incident. Feelings of general unsafety and vulnerability in public are directly connected to the silence of bystanders in the cases submitted to iReport.ie. The impact of verbal abuse, for example, can be severe when it appears to be condoned by a large group of people (e.g. on public transport), or by a person in authority, who do not attempt to intervene or support the targeted person(s) in any way. Evidence gathering of the kind demonstrated by this report is however supported greatly by the information provided by witnesses and secondary witnesses, whether strangers, family, friends or acquaintances. In the absence of effective statutory mechanisms for recording racist crimes and non-crime incidents, in the context of current low trust in current mechanisms, and the burden which reporting places on victims of racism, bystanders are encouraged to document racism in order to help identify it, understand it and advocate for effective responses to it.
Read the full Q9 & Q10 iReport Reports of Racism in Ireland here.
Read press release here.
Click to access previous Reports of Racism in Ireland.