REPORTS of racism in Ireland 2021

2021 Reports of Racism in Ireland: Overview

“When online racism rears its ugly head, it’s easy for people to dismiss it because they see it often as faceless attacks and therefore should not be taken seriously but the reality is, it’s no different to offline racism. The cruel situation is that you’re more than likely to experience more of it online and the continuous toll it can have can be immense. The abundance of racism that minority groups experienced – particularly by those in Ireland of Asian background – grew during the pandemic.

Reports like this allow us to learn and grow and though the facts may be uncomfortable, they are invaluable as they offer us a true insight into a vital aspect of Irish society. We can always do better.”

2021 began with a terrifying assault on the US democratic process, reminding the world of how powerful the threat of openly avowed white supremacy remains now that it has rubbed shoulders with the mainstream, perhaps contributing to the Biden presidency’s hesitancy to dismantle its predecessor’s border regime. Across Europe, racist and right-populist political formations and governments advanced xenophobic, antisemitic, anti-muslim, misogynistic, and homophobic agendas, railing against liberal elites. In the UK, the post-Brexit border rhetoric threatened to destabilise the Irish peace process by stoking the basest ethnic tensions, enforced 1940s style ‘foreign’ registrations on migrant workers, and culminated in record drownings in the English Channel. At home, our recent history interposed the Mother and Baby Homes Commission’s long-awaited final report, which drew sharp criticism for the timidity of its findings and recommendations, including a perplexing assertion, contrary to the ample evidence it recorded, that there was no racial discrimination against ‘mixed race’ children. Globally and at home, the evolution of the pandemic continued to lay bare the contours of systemic racism. In spite of the recognition that inequalities of outcome undermine the task of combating the virus effectively, vaccine nationalism and the profit imperative were permitted to sabotage efforts to do what the scientific community insist to be essential; pool resources and work in concert to eliminate a global threat. This response doesn’t augur well for
the task of tackling the climate emergency, which similarly impacts disproportionately on racialised groups, contributing increasingly to the global inequality and the ongoing refugee crisis.

Against the background of these trends in systemic racism, on a world scale, in Europe and at home, iReport.ie findings on levels of racist violence and discrimination in Ireland were broadly consistent
with previous years. Broadly, that is, with a notable increase in the targeting of Asians; as in 2020 this is elevated value is attributable to Covid related xenophobic doscourses. That the overall levels of violence and hostility did not also grow significantly in spite of strenuous investment by far-right actors is testament to the successes of the increasingly organised solidarity efforts of Trade Unions, civil society-led initiatives like the Far Right Observatory, and grassroots community actors like Communities Against Racism, in meeting increasing community demand for analysis and resources with which to combat far right discourses and disrupt far right activities.

At an institutional level the government publication of the Interim Report the Anti Racism Committee on a National Action Plan Against Racism (NAPAR) contains language and a framework which hold the promise of a NAPAR which could be groundbreaking in addressing systemic racism squarely, potentially placing Ireland in the proud position of a global exemplar on equality. However, this outcome hinges on leadership, resourcing and an effective implementation, oversight and monitoring plan. There is promise too in the Criminal Justice (Hate Crimes) Bill 2021, as well as initiatives like the Garda National Diversity Forum, other changes in practice from An Garda Siochana and the Office of the Director of Public Prosecutions on matters of criminal justice for minorities. As with the NAPAR, these initiatives need clear means for measuring outcomes, and proper tools for meaningful implementation including resourcing and effective oversight. In their absence, our best measure, the iReport data, is telling us that trust in Gardai and the criminal justice system among minorities is still alarmingly low. One place we could start is in addressing the conditions which have led to the stalling out of the Garda Siochana Ombudsman Commission (GSOC)’s investigation into the fatal shooting by Gardai of George Nkencho on 30 Dec 2020. The fact that GSOC has been unable to deliver on their promise to the Nkencho family to conclude their investigation within a year of George’s killing, has as our findings show, serious ramifications for minorities’ faith in the authorities. This simply has to change. 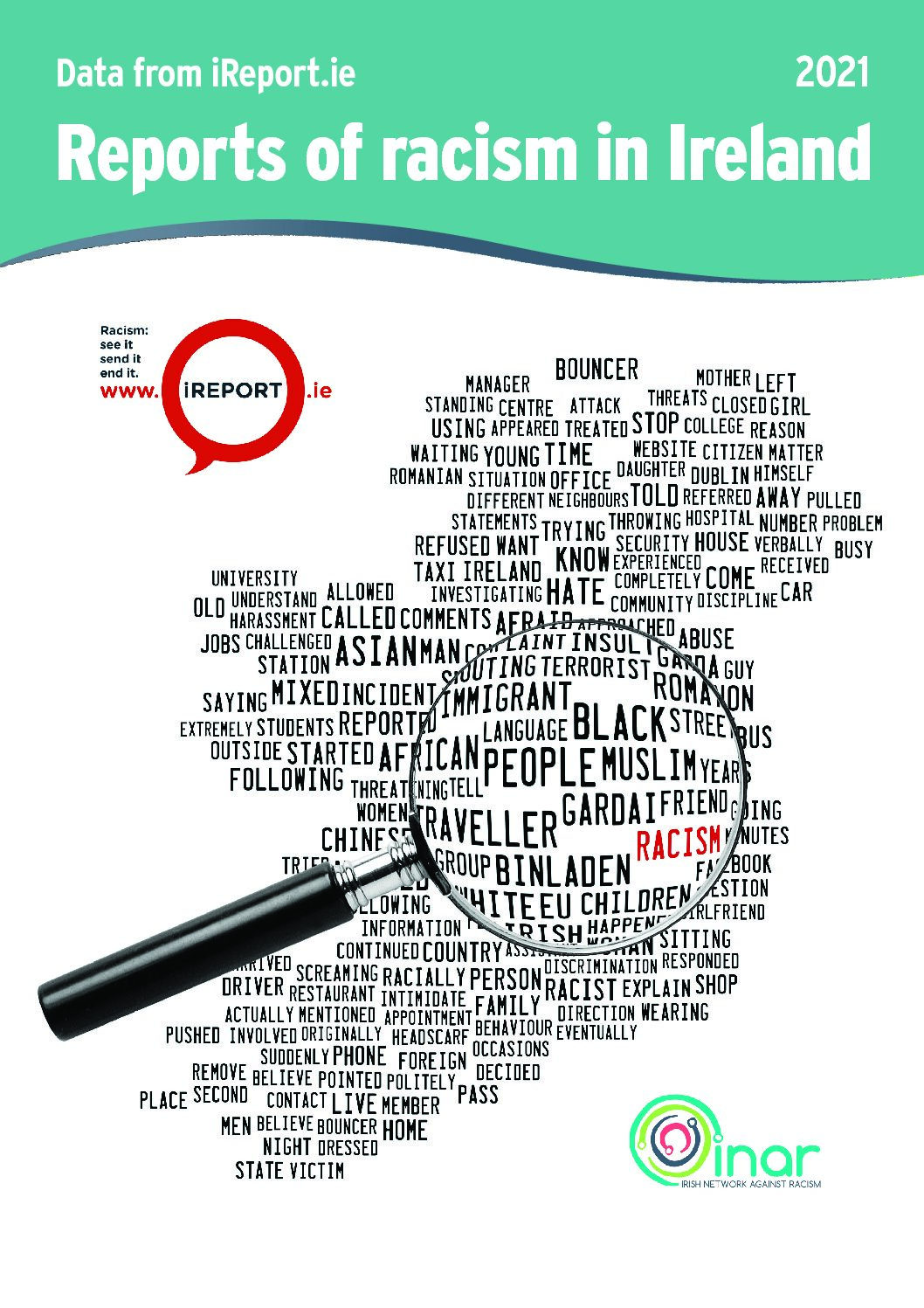 Summary of the Report

You can watch the video summary of our 2021 Reports of Racism, presented by members of the iReport Peer Review Panel, Siphiwe Moyo, Sakshi Arya & Daniel Kamenyezi.

You can also download the pdf summaries of our 2021 Reports of Racism, which are available in 11 other languages

Reports of Racism in Ireland: Infographics 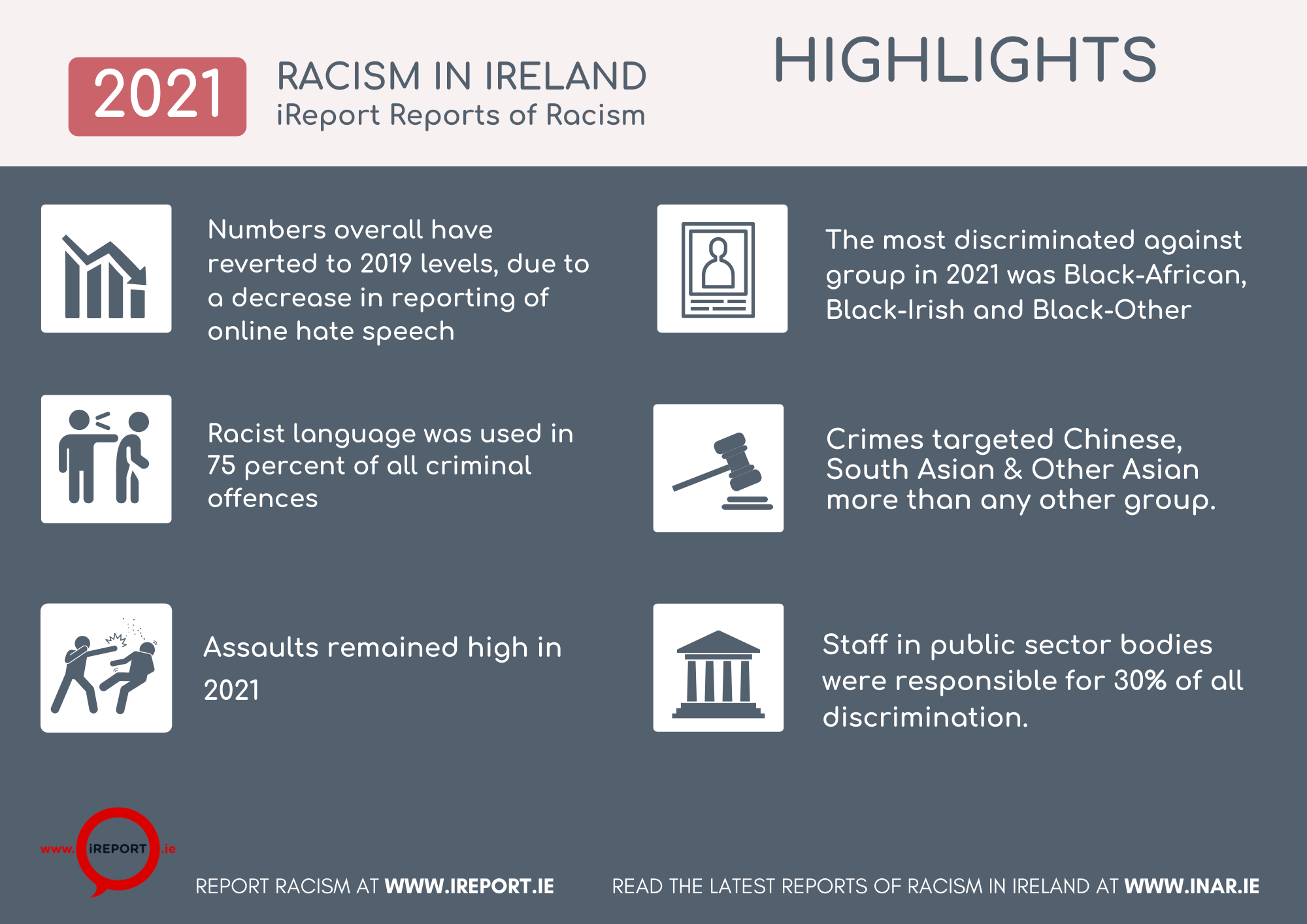 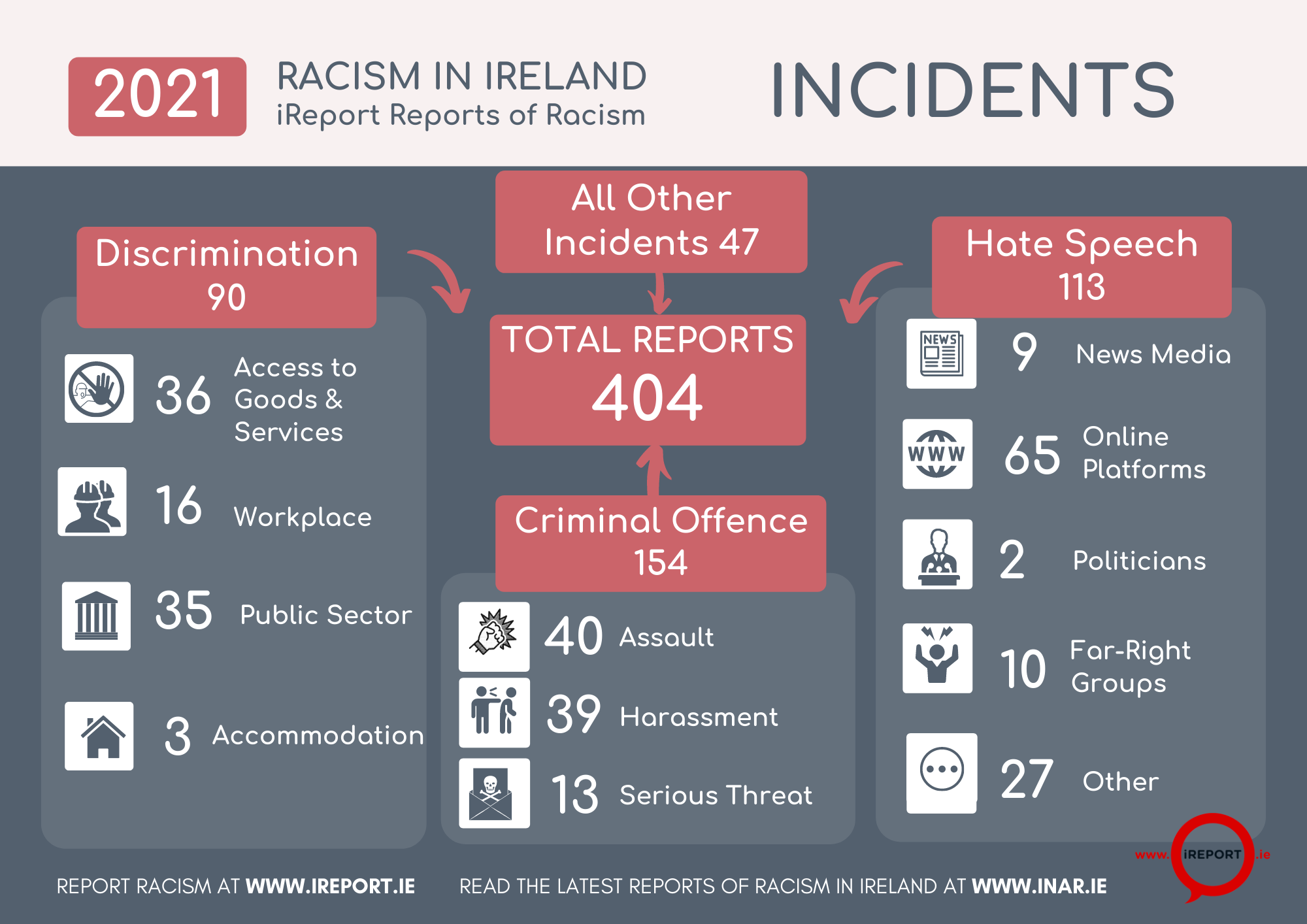 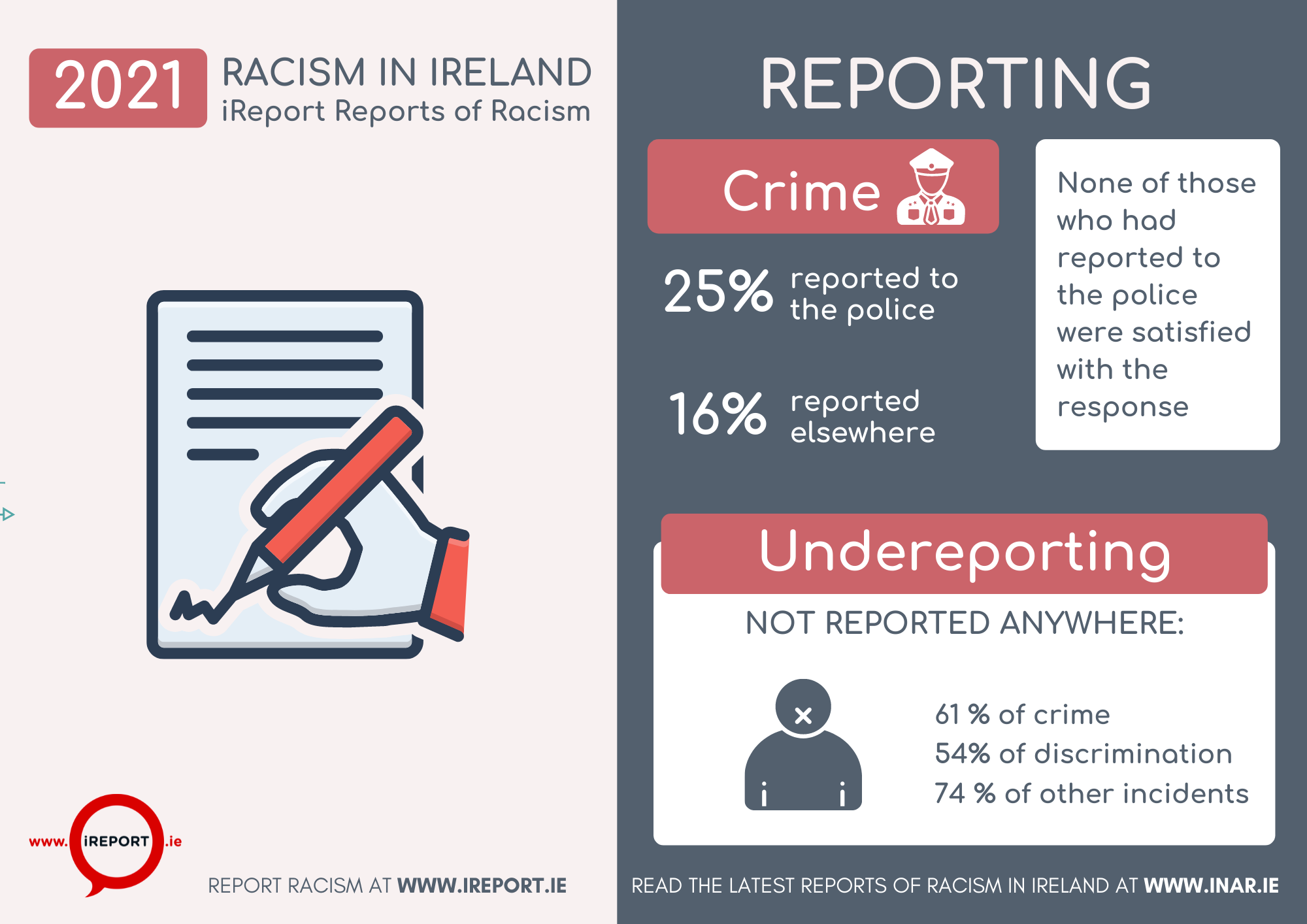 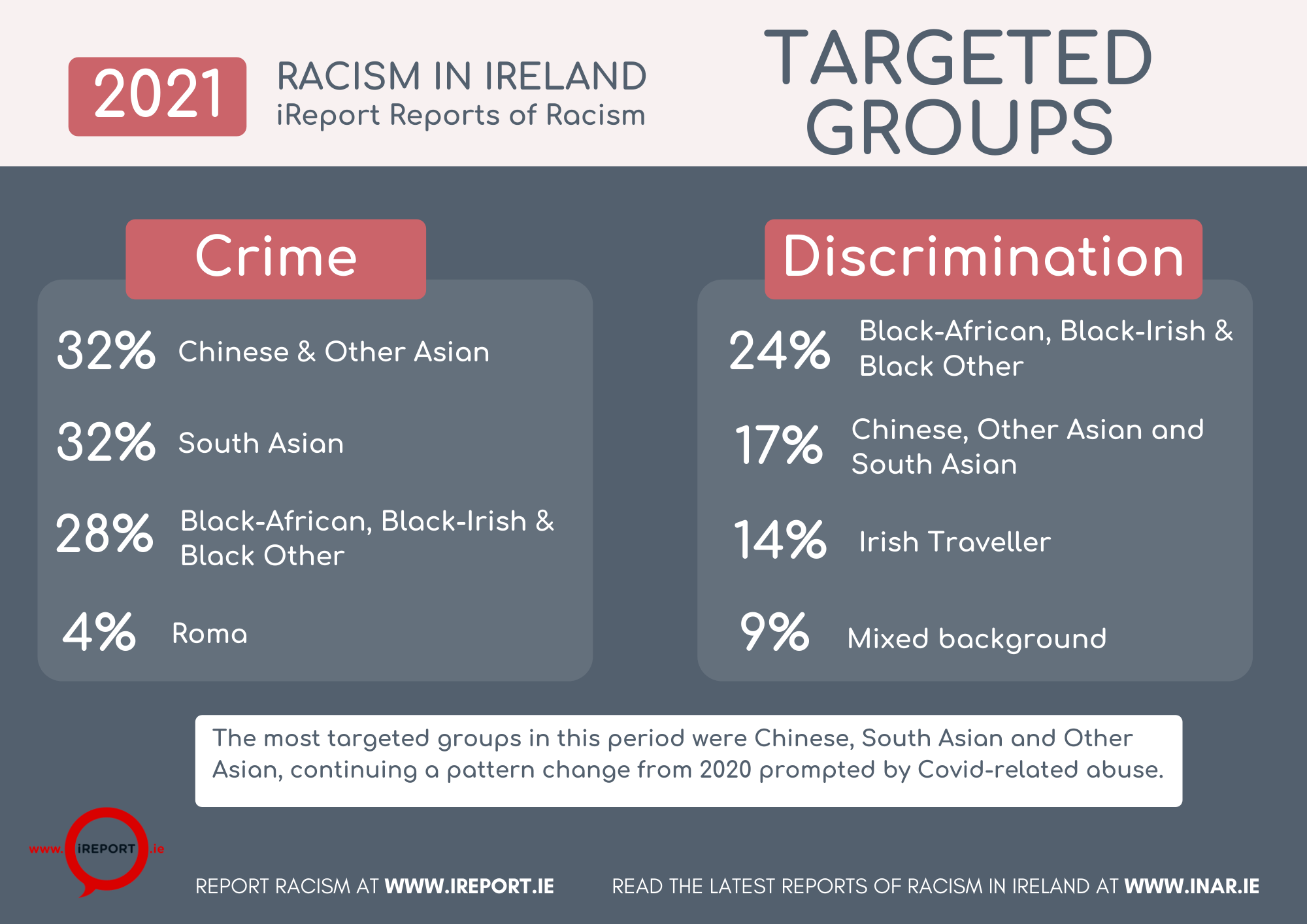 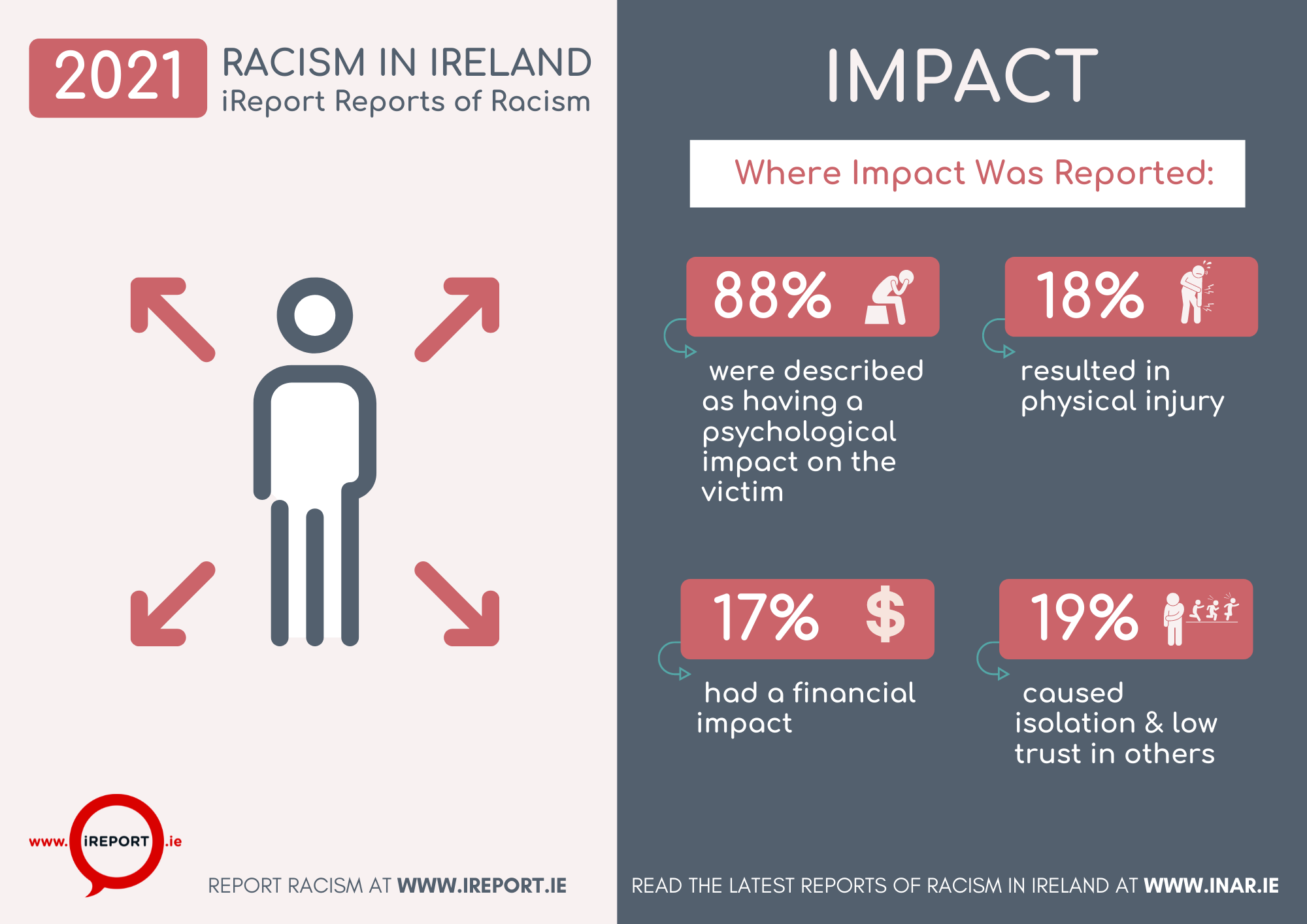