Racism as part of a system of oppression 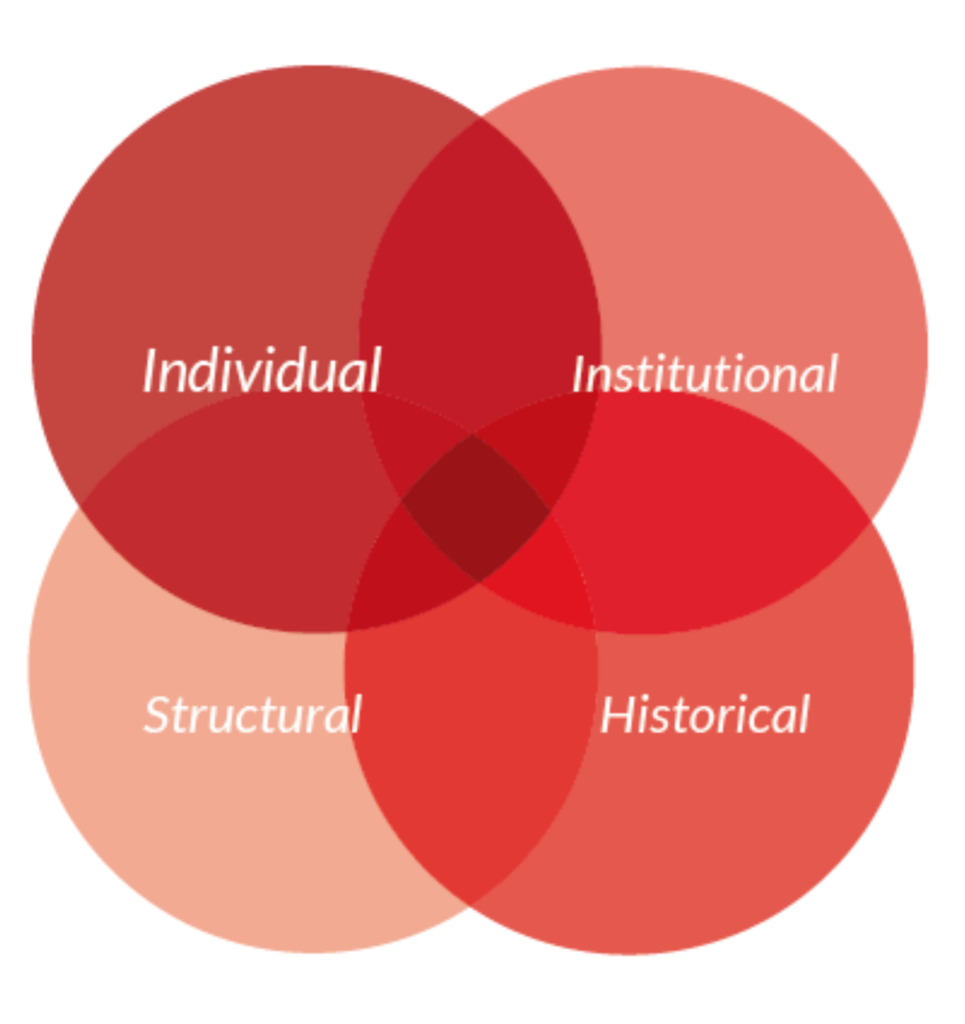 Racism is best understood as being an expression of a system of oppression which has its roots in a history of power and the subordination of ”non-white” groups. Racism is a system which complements and operates through the other systems of oppression with which it intersects: for example, the oppression of people based on their class (economic), their gender (sexism) or their identities as LGBTQI+ people (homophobia and transphobia). The system of oppression reinforces and strengthens existing privilege. The important thing is to understand racism as a system that is much more than something performed by racists in individual acts of bigotry.
Like other systems of oppression, racism operates through several overlapping dimensions: historical, structural, institutional and individual.

HISTORICAL RACISM has to do with the specific histories of domination and subordination of groups (i.e. the racialisation of their relationships) in any given society. Different societies have different histories of conquest and domination, and so patterns of racialisation are distinct, if overlapping. In the US, the specific history of people of African descent means that to this day African Americans experience a distinct form of racialisation from Native Americans, from Roma in Europe and from Asians in Britain, for example.  These histories impact on the position of groups in societies today because they continue to be reflected in the structures and institutions of those societies, in their laws and legacies, and in the language and cultural attitudes which persist.

Historically Irish people were “racialised” through the process of British conquest and colonialism in Ireland.  Since GiraldusCambrensiswrote in the 12th century, British colonial writing has labelled Irish people as drunken, as animals, treacherous, primitive, and illiterate. Dehumanising Irish people like this provided the ideological justification for the large scale violence and population displacements involved in the conquest of Ireland, the attempted erasure of its culture and language, the seizure of its wealth and the subjugation and impoverishment of its peoples, and the normalisation of the “Great Hunger” (the 1847 famine resulting in over a million dead), all done under the pretext of “civilising” the Irish.

This model of racist dehumanising was replicated throughout the world to justify the conquest, mass-killing, subjugation and enslavement of colonised peoples, a process which sometimes also involved the collaboration of other colonised people, including the Irish in many instances. This means that today, Irish people in many parts of the world enjoy the privileges of whiteness, while at the same time many aspects of anti-Irish racism still linger and, in some settings, some Irish people still face anti-Irish racism and discrimination.
How did the Irish establish themselves in the white-dominated new world?
Thousands of Irish people arrived in the Americas in the 17th century having been captured, forced into indentured servitude, and shipped initially to the West Indies. This was a very brutal experience, but a distinct one from that of people of African descent. Indentured servitude was not a system of chattel slavery; servants were indentured for a fixed-term and were not owned like property. An indentured servant could always buy their freedom and in spite of their subservient status did enjoy certain human rights, in addition to their status not being passed on from one generation to the next.
These important distinctions contributed to the creation and enforcement of racial hierarchies and prevalence of racism toward African Americans by the Irish. Irish mass migration after the Great Hunger in the 19th century initially led to impoverished Irish refugees and freed former slaves intermixing, intermarrying and living in relative harmony in places like Philadelphia, where they were held in equal disdain by their racial ‘superiors’. But through a process of using the Irish in a system of organised violence to enforce segregation, the white hierarchy began the process of making the Irish acceptable into the “white” race, and all the rights that entailed, at the expense of equal treatment for African Americans. Today, Irish Americans still enjoy the privileges and benefits of whiteness which African Americans do not.

More on the history of anti-Traveller racism can be found:

Another example of a racialised group is Roma. “Roma” is a name used to denote a wide range of different nomadic people who inhabit Europe and other parts of the world, who are all descended from nomadic tribes who migrated from Rajasthan in northern India over 1000 years ago. Although Roma have played an important role in the development of many European cultures, trade routes and economies, they have also faced a long history of scapegoating, demonisation and oppression including multiple examples of widespread discrimination leading to persecution, segregation, enslavement, ethnic cleansing and extermination in the Nazi camps. The racialisation of Roma today continues in the form of ghettoisation, discriminatory laws and practices, widespread violence and hate crime, discriminatory policing and Eugenics-inspired practices such as forced sterilisation.

RACIALISATION
Today, many other groups of people (mostly “non-white” and non-European, but also including white-skinned groups like Irish Travellers or eastern European migrants in Ireland) still experience similar processes of racialisation. In many parts of our globalising world, migrants are racialised for being migrants. Jews are racialised for being Jews and Muslims are racialised for being Muslims.
Globally, ‘race’ is one of the key bases for inequality, along with other bases with which it intersects, like gender, class and the marginalisation of LGBTQI+ and disabled people.

STRUCTURAL RACISM, sometimes called societal racism, refers to the fact that society is structured in a way (including via cultural norms) that excludes substantial numbers of people from ethnic minority backgrounds from taking part equally in social institutions, or from having equal life outcomes in for example health, educational attainment, death rates, infant mortality rates, incarceration rates, arrest rates, employment rates etc.
The fact that life expectancy at birth for male Travellers is 15.1 years less than men in the general population, is an example of structural racism. The fact that 16% of Africans living in Ireland are out of work, compared with 4% of people from western European countries, is another.

INSTITUTIONAL RACISM refers to forms of racism expressed in the practice of social and political institutions; to the way, institutions discriminate against certain groups, whether intentionally or not, and to their failure to have in place policies that prevent discrimination or discriminatory behaviour.
It can be found in processes, attitudes and behaviours which lead to discrimination through unintentional prejudice, ignorance, thoughtlessness, unconscious bias and racist stereotyping which disadvantages ethnic minority people. Institutional racism relates to the entire institution, including people.
Structural and institutional racism create the conditions that make forms of individual racism seem normal and acceptable, making discrimination and violence more likely.

INDIVIDUAL OR “INTERPERSONAL RACISM” is the term which covers the forms of racism which most people commonly understand as racism because they are the most visible forms. It covers all interactions or behaviour between individuals that are racist or have racist content.  The term interpersonal racism covers a range of types of racist incidents, from “microaggressions” to racist name-calling and racial bullying and harassment, to discrimination and racist hate crimes. Although incidents of interpersonal racism will be the most commonly recognised forms of racism, they happen because of the wider context of the historical, institutional and structural racism of society. The impacts they cause are magnified because they reinforce and are reinforced by the wider structures of racism.

THE COALITION AGAINST HATE CRIME
Irish law does not as yet fully recognise hate crime or hate speech as a criminal offence, however INAR, as part of the Coalition Against Hate Crime, is working hard to change this. 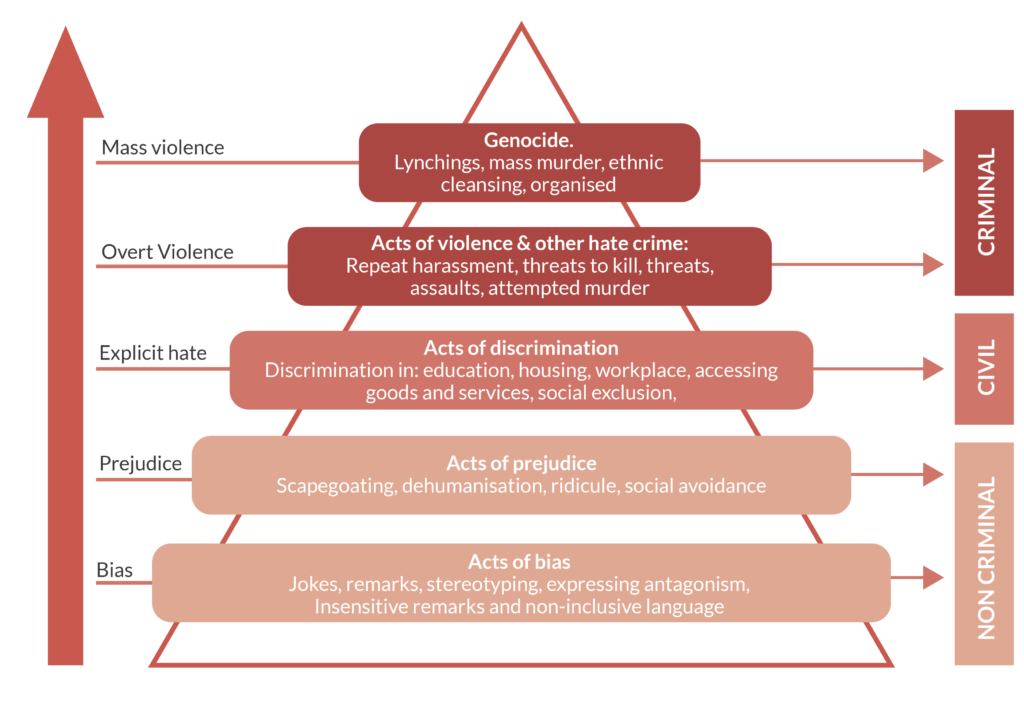 The pyramid of hate is a scheme for explaining the relationship between the most extreme acts of racial violence, including genocide, and other lesser acts of violent and verbal hatred and prejudice.  Every escalation of hatred is more likely to occur if the context includes the presence of ‘lesser’ manifestations of prejudice and hatred. The people responsible for escalating acts of hatred, do so under the pretext that they are expressing the views of the group they claim to represent; they are enabled to escalate to the next level by the normalisation of prejudice around them. As each level of hatred becomes accepted as normal, society moves up the scale of hatred towards genocide.