You can’t just “Shake it Off” – ‘hate crime’, ‘institutional racism’ and the state 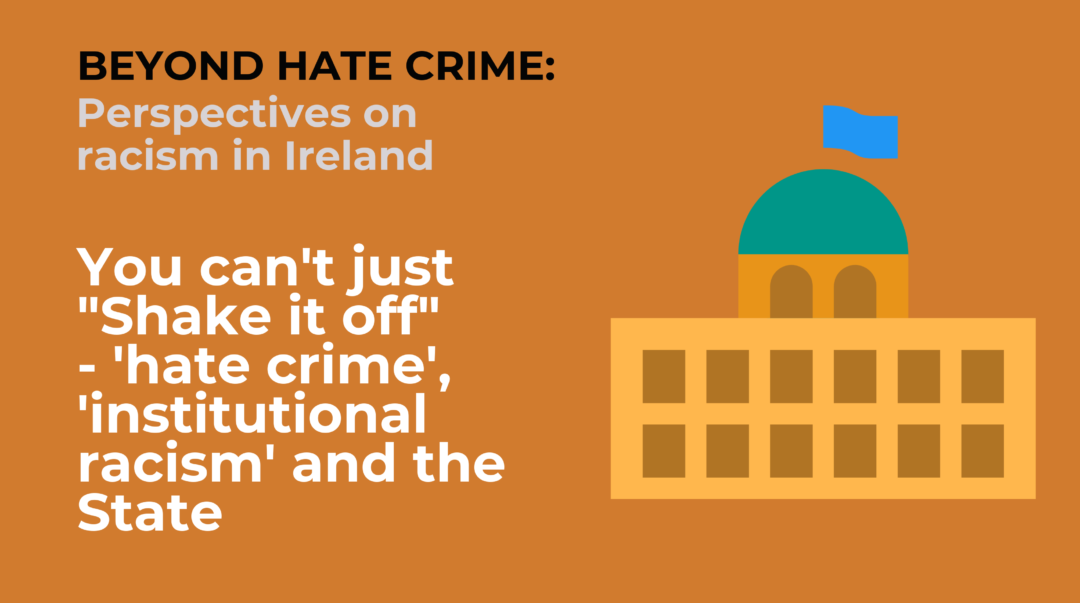 Go to the Beyond hate crime: Perspectives on racism in Ireland main page
Download You can’t just “Shake it Off” – ‘hate crime’, ‘institutional racism’ and the State (pdf)

Whatever happened to institutional racism?

The world has changed enormously in the intervening 50 years but the currency of ‘institutional racism’ should remain clear – you can swap ‘Birmingham, Alabama’ for ‘Yemen’ or ‘Gaza’ or ‘Myanmar’ and make the same point about contemporary racism. Equally tellingly, you can look at African American experience in contemporary Birmingham, Alabama or, indeed, the experience of migrant communities in Birmingham, England and make exactly the same point. Institutional racism keeps up its remorseless logic across generations, across communities, across the world, reproducing inequality and entitlement, condemning communities of colour to underdevelopment and reproducing white privilege. The concept retains both its explanatory power and its revolutionary simplicity.

There are two key lessons from this in terms of our discussion. First, this incisive theoretical understanding of the structural aspects of racism emerged – very directly – out of black struggle that was labelled as ‘hate’ by the contemporary US state. Second, the state that did this was a paradigmatic example of ‘institutional racism’. This general position obtains – racism institutionalised through the state is its most dangerous, egregious form of all. This was true historically across the colonial states of Europe; it was true in Nazi Germany and it was true in apartheid South Africa. It remains true of contemporary states across the world.
This reality was most famously acknowledged at state level by Sir William Macpherson in his 1999 report into the murder of Stephen Lawrence. In the UK context, Macpherson redefined ‘institutional racism’ as:
The collective failure of an organisation to provide an appropriate and professional service to people because of their colour, culture, or ethnic origin. It can be seen or detected in processes, attitudes and behaviour which amount to discrimination through unwitting prejudice, ignorance, thoughtlessness and racist stereotyping which disadvantage minority ethnic people.
This is less powerful, less functional, and much less radical than the Carmichael/Hamilton definition.  Nevertheless, it was an example of a state engaging with its own culpability in terms of ‘institutional racism.’  In this sense it was a high-water mark for state reformism on racism to work to such a definition. And what was the response? First, the state denied – the Metropolitan Police, despite the damning evidence of Macpherson, insisted that it was not ‘institutionally racist.’ Then, for a brief moment, the state engaged – the UK Home Secretary suggested that Macpherson was a ‘blueprint for the eradication of racism from the criminal justice system.’ Then, perhaps recognising the can of worms it had opened with such a bold commitment, it swapped the focus on ‘institutional racism’ for ‘hate crime.’
We can emblemise this shift in the UK with the appearance of House of Commons Northern Ireland Affairs Committee report on The Challenge of Diversity: Hate Crime in Northern Ireland: Ninth Report of Session 2004–05.  This report – engaging with Northern Ireland, the UK polity most obviously associated with inequality institutionalised across the state – could develop its whole analysis without any serious reference to Macpherson or Stephen Lawrence.  It was as if the UK state’s own ‘blueprint for the eradication of racism from the criminal justice system’ had never existed. As so often, Northern Ireland was the testing ground – and swapping ‘hate crime’ for ‘institutional racism’ allowed the UK state to remove itself from the petard it was hoist upon with the Macpherson report.
More generally, this approach to repudiating institutional racism took the ‘individual racism’ side of the Carmichael/Hamilton argument on an even stranger journey. Now states that showed little commitment to addressing the structural inequality framed so powerfully by ‘institutional racism,’ suddenly became very keen to line up against ‘hate.’ This is a general trend that extends well beyond race and racism, but one example of how this works politically will suffice. We all know about the ‘Charlie Hebdo’ attacks. This violence wasn’t hard to problematise – the murder of journalists, however provocative their work, cannot but raise profound questions of free speech; the racist murder of Jewish people cannot but raise profound questions of antisemitism. But the political response from the state was telling. As ordinary people mobilised against the attacks, the political elite of Europe (and beyond) found it necessary to position itself at the head of a march against hate. [8] One observer characterised it as ‘a rogue’s gallery of political leaders.’ [9]  Organisers had tried to exclude Marine La Pen and the Front National, but President Hollande insisted that all French people could be there. (And, yes, then Taoiseach Enda Kenny was there too). The Prime Minister of Iceland was lambasted as the only western European head of government not to attend the march.
It seems almost churlish to single out any of these leaders since they were individually associated with a panoply of ‘institutional racisms’ – from David Cameron’s ‘hostile environment’ for migrants to the EU’s ‘Fortress Europe.’  But Israel’s Benjamin Netanyahu – he who would go on to excuse the slaughter of 50 Palestinian protestors earlier this year as ‘self-defence’ – and Hungary’s Viktor Orban – the architect of ‘illiberal democracy’ who wants to rebuild Europe with his own toxic combination of Islamophobia and anti-migrant policies – attracted particular opprobrium at the time.  To cap it all, Saudi Arabia’s ambassador to France was there. His country’s approach to press freedom had been demonstrated the previous week with the flogging of a blogger imprisoned for ‘insulting Islam.’ More recently, of course, their approach to freedom of speech was confirmed by the murder of journalist Jamal Khashoggi inside the Saudi consulate in Istanbul. But the Saudis, too, could unite against hate. In stark contrast, this same ‘rogues gallery’ remains silent in 2018 as Saudi missiles kill children across Yemen – because this political violence has been conveniently labelled as something other than ‘hate.’

So, the notion of ‘hate crime’ is dangerous because it allows states to label some racist violence out of existence. But it is often equally dangerous when it is operationalised. In this context, it is particularly apposite to look across the border at Northern Ireland. The Six Counties has become a perfect example of how a focus on hate crime does very little to address racism in general and racist violence in particular.  Since the 2004 ‘Hate Crime’ report referenced earlier, there has been a flurry of activity around ‘hate crime’ in Northern Ireland – in terms of both criminal justice and wider campaigning – with everyone, including the police, ‘uniting against hate.’ [10]  In part, this was a response to the identification of Northern Ireland as ‘the race hate capital of Europe’ and Belfast as the ‘most racist city in the world.’  In practice, however, the criminal justice system in Northern Ireland responded to the ‘race hate capital’ accusation by doing very little apart from signalling its dislike of hate and its commitment to tackling ‘hate crime.’
Most shockingly in this context, the state failed to legislate for ‘hate crime’ at all. As the Northern Ireland Policing Board (NIPB) recently made clear, ‘there is no such thing as a “hate crime” in Northern Ireland.’ [11] Bizarrely, given the amount of discussion there is around ‘hate crime’ across Northern Ireland, there is no legislation criminalising such behaviour.  In contrast to the situation in Britain, evidence of racial or religious or homophobic motive allows for increased sentencing, but it is not a distinct crime. In consequence, in a state that has pontificated at length on its opposition to ‘hate crime,’ actual convictions are rare. Moreover, when a probation intervention attempted to do some work with some of these ‘hate criminals,’ it couldn’t identify them since none of them were in prison. [12]
Put simply, even when issues of race are not lost in the wider sweep of more general discussions of ‘hate’ and ‘hate crime,’ this approach does nothing to address the specificity of racist or sectarian violence in Northern Ireland. This hate crime regime presents a bizarre post-modern spectacle – by Kafka out of Orwell. Everybody – from the Sinn Féin/DUP (non)government to loyalist paramilitaries and the police – ‘unites against hate’ in the ‘hate capital of Europe’ and yet the state acknowledges that there is ‘no such thing as hate crime in Northern Ireland.’ Meanwhile, the relentless progression of racist and sectarian violence continues.

As the Northern Ireland experience suggests, the notion of ‘hate crime’ often constitutes a lightning rod for public disquiet about different forms of violence. It also provides an easy way for the police and criminal justice system to be seen to be ‘doing something.’  But the growing demand for a similar intervention on ‘hate crime’ in the south of Ireland should carry a huge health warning. It is clear from our review that activity around ‘hate crime’ does as much to disguise racism as it does to address it. Moreover it is clear that states have cynically used the focus on hate crime to displace attention from institutional racism – not least because this concept addresses real structures of power and inequality rather than caricatures of ‘evil.’  Most cynically of all, the hate crime finesse allows the state to reinvent itself as anti-racist. This allows the state to join – and often lead – the coalition against ‘hate’.  But it assumes this role without addressing any of the racism that continues to be institutionalised through the state – in the criminal justice system and the immigration system and the refugee system and in every other state institution.
By way of conclusion, we can make a couple of simple observations. First, if the capacity to label ‘hate crime’ is surrendered to the state, it is as likely to be used against people of colour as it is in their defence. Second, if either Viktor Orban or Benjamin Netanyahu or the Saudi Ambassador is linking arms in solidarity with you against ‘hate,’ you are standing in the wrong place. So, we need to think long and hard before we buy into the notion that the ‘hate crime’ paradigm offers any kind of a model for anti-racism in Ireland. For all that the state condemns ‘hate,’ it is rarely on the side of racial justice. Despite the admissions of ‘illegality’ and ‘unconstitutionality,’ the old COINTELPRO programme was reframed in the US.  ‘Hate groups’ are back on the FBI agenda. And, yes, an awful lot of people would like to see Black Lives Matter added to the list….[13]

Robbie McVeigh is an Irish writer and researcher based in Edinburgh.  He is currently working on publication on Ireland and legacies of colonialism with Bill Rolston.

References
[1] For example, ‘hostility to men’ is now being considered inter alia by the British Law Commission in its review of ‘protected characteristics’.  BBC News 2018. ‘Hostility to men and elderly people could become hate crimes’ https://www.bbc.co.uk/news/uk-45870948
[2] A. Sivanandan (1985), “RAT and the Degradation of the Black Struggle”, Race and Class, Vol. 26, No.4, pp.1-33, http://journals.sagepub.com/doi/abs/10.1177/030639688502600401?journalCode=racb
[3] See ‘Incitement to Hatred in Northern Ireland’ for background context on the evolution of ‘hate crime’ legislation https://caj.org.uk/2018/04/27/incitement-to-hatred-in-northern-ireland-research-report-by-dr-robbie-mcveigh-for-the-equality-coalition/
[4] For example, this is way in which Article 19 and the ‘Camden Principles’ use the term https://www.article19.org/resources/camden-principles-freedom-expression-equality/
[5] ‘Martin Luther King, Jr’s Searing Antiwar Speech, ‘Fifty Years Later’
https://www.newyorker.com/culture/culture-desk/martin-luther-king-jr-s-searing-antiwar-speech-fifty-years-later
[6] ‘COINTELPRO’ https://vault.fbi.gov/cointel-pro
[7] ‘Burglars who took on FBI abandon shadows’ https://www.nytimes.com/2014/01/07/us/burglars-who-took-on-fbi-abandon-shadows.html
[8] ‘Huge crowds gather for Paris unity rally – as it happened’
https://www.theguardian.com/world/live/2015/jan/11/1m-expected-for-anti-terror-rally-live
[9] Press Gazette ‘Charlie Hebdo march was amazing demonstration of unity marred only by ‘rogues gallery’ of political leaders’ https://www.pressgazette.co.uk/charlie-hebdo-march-was-amazing-demonstration-of-unity-marred-only-by-rogues-gallery-of-political-leaders/
[10] See, for example, Unite Against Hate http://www.uniteagainsthate.org.uk and PSNI ‘Hate Crime’ https://www.psni.police.uk/crime/hate-crime/
[11] ‘Thematic Review of Policing Hate Crime’ https://www.nipolicingboard.org.uk/sites/nipb/files/media-files/race-hate-crime-thematic-review.PDF
[12] See ‘Living the Peace Process in Reverse: Racist violence and British nationalism in Northern Ireland’ http://journals.sagepub.com/doi/abs/10.1177/0306396814567403
[13] See ‘The FBI’s Dangerous Crackdown on “Black Identity Extremists’’‘ https://www.nytimes.com/2017/11/15/opinion/black-identity-extremism-fbi-trump.html and ‘Black Lives Matter is Not a Hate Group’ http://time.com/4413786/splc-black-lives-matter/

Putting manners on the State? Can hate crime legislation be useful reform to the struggle for racial justice? →
Skills Posted on