iINAR is a founding organisation of the Coalition Against Hate Crime Ireland (CAHC), a civil society coalition whose Members represent groups commonly targeted in hate crimes, including Minority Ethnic Groups, religious minorities, LGBTQI communities, people with disabilities, and others, as well as academics and researchers working to advance the aims and objectives of the Steering Group. Currently CAHC is chaired by the Irish Council for Civil Liberties (ICCL).

The purpose of Coalition Against Hate Crime Ireland 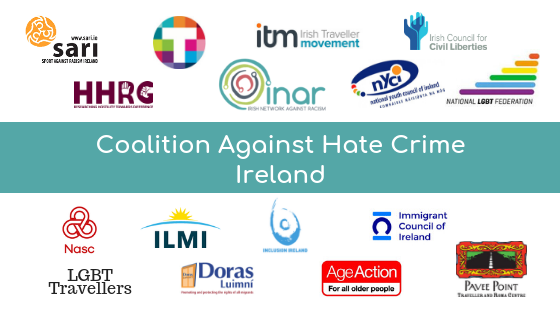 The purpose of the CAHC is to promote meaningful reform of the law, policy and practice as it relates to hate crime in Ireland including, but not limited to:

Member organisations are encouraged to appoint a representative with direct lived experience.

Recognising the wealth of experience, knowledge and expertise that members of the Steering Group bring, it is envisaged that it will contribute in the following key areas:

Members of Coalition Against Hate Crime include:

Calling for the introduction of hate crime legislation in Ireland.

Find out more about INAR’s work on racism and policing in Ireland.