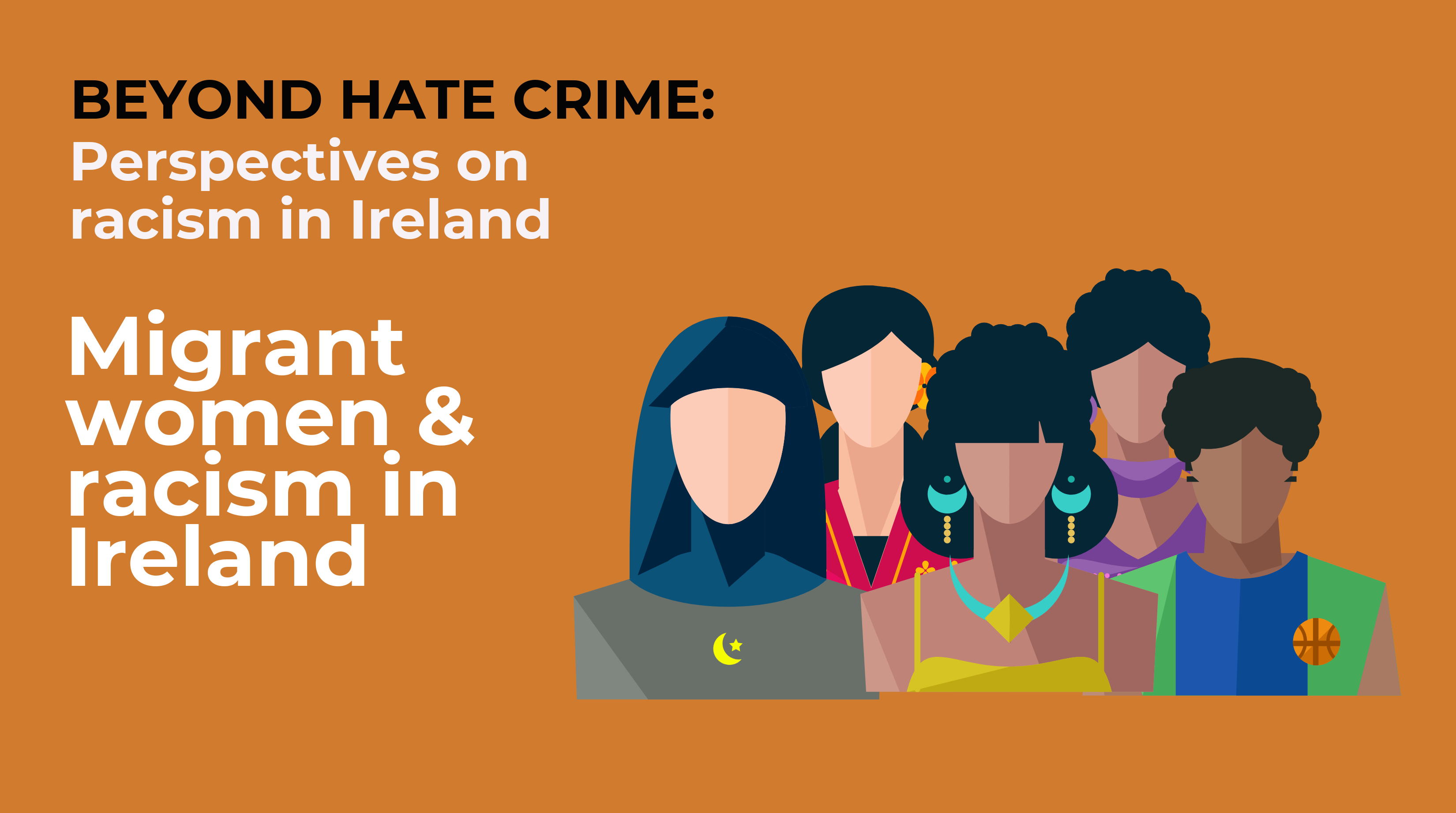 Migrant women and racism in Ireland

Gilberto Freyre, a Brazilian sociologist and anthropologist wrote a book called Masters and Slaves, which clearly lays out colonial and patriarchal hierarchies, particularly where white and black people “should be”. Drawing comparisons with Ireland, most people fail to notice that many migrants, despite leaving behind prosperous careers in their home countries, work in low-paid, exploitative jobs in Ireland, all too often in conditions analogous to slavery. So many domestic workers, au pairs, women working in the catering industry and women in Direct Provision centres are kept in places where they “should be” by Irish state policies, and are often told to be grateful. These workers have no voice and cannot complain, fearing for their visa status and family reunification applications, or being forced into homelessness. Meanwhile, employers are often in breach of employment legislation, paying €3.00 per hour, providing no contracts, or respect. Thus au pairs are often told they are “part of the family” yet are not allowed to eat with the family at mealtimes.

Many of these women are highly qualified and have desirable or essential skills. So why not give them a chance to use their skills and demonstrate their qualities? Why not recognise migrants’ diplomas? I for one had a career, working as a civil servant in a highly regarded teaching hospital. But it seems that when we come to Europe our capabilities, achievements, and memories are being erased as we play the role of low-paid workers, reinforcing the global care chain whereby we leave the Global South to fill the childcare and elder care gaps in the Global North. Migrant women’s work in private homes enables our European sisters to work outside the home and flourish in an Ireland that, as they keep reminding us, “is a much better place for women after the referendum”. Which Ireland is better after the referendum? Are we, migrant women, included in this Ireland? Are we welcomed into white feminist spaces in this Ireland? Do we have a say in decision making regarding our own lives? Unfortunately, we are not and do not.

The fact remains that many migrant women are being taken for granted. Among the issues faced by most migrant women in Ireland are the privileged assumptions made about our place, status, and education and the doubts about our capacity to contribute to Irish society. Although many of us are highly educated, people choose to adhere to the stereotype Filipino elderly carers, Brazilian, Venezuelan and other Latin American au pairs, demonstrating Irish society’s message regarding “where we should be”, seeing migrant women as “great carers”. We are told to stay where we are and not dare to aspire to compete with our current bosses because they are native white Irish citizens. Consequently, government policy driven by private privilege over public interest reinforces this dehumanising ethos and ensures the hierarchical structure keeps migrant women “where they should be”.

My argument is that the Irish Immigration system – by failing to recognise migrants’ skills and potential – hinders and ignores their ability to contribute to Irish society.  Ireland’s visa schemes, merely aimed at addressing labour shortages in sectors such as the care sector, are indicative of structural racism and the government’s intention of putting into place arbitrary measures to secure the state against people willing and able to provide essential labour and actively participate in the economy. Thus migrant women from the Global South can expect stricter questioning when landing in Ireland or applying for visas than migrant women from the Global North. Similarly, most deportations and refusals of permission to land happen to women from the Global South, not to mention the detention of female asylum seekers in Direct Provision Centres sharing small, not fit for purpose spaces, unable to cook for their families and forbidden from both work and education.

Other aspects of structural racism see migrant women from the South encountering many barriers to career progression. Visa restrictions, the narrow eligibility categories for work permits, the absence of work permits for the care sector, and the immigration system’s refusal to recognise their skills, all impede migrant women’s search for better jobs, forcing them to remain in the low-paid jobs sector regardless of their qualifications or potential.

The Migrant Rights Centre Ireland report Workers on the Move: Past Lessons and Future Perspectives on Ireland’s Labour Migration (2015) highlights some of the problems with Ireland’s labour migration system:

The introduction, development and implementation of Ireland’s immigration system occurred for the most part without a policy or legislative vision. This has contributed to some of the problems experienced by migrant workers. Both employers and workers faced a poorly-regulated system which was completely unprepared to receive larger numbers of workers. Inevitably, unscrupulous employers benefitted from poor oversight and administrative barriers, and some migrants suffered as victims of labour exploitation and irregular migration. Ireland opted to introduce an employment permit modelled on a guest-worker system, which did not prepare the State for the eventuality of migrants settling down and did not address the individual needs of workers outside of their employment relationship.

Even when migrant women succeed in obtaining a visa to live and work full time in Ireland  they face other obstacles such as: the lack of previous references in Ireland for either housing or work; the dependence on their employers to obtain their PPS numbers, putting their access to social services at their employers’ mercy; the shortage of money after spending their savings to make ends meet during the visa process, which take several years; the lack of access to basic healthcare, as without their PPS number they cannot even avail of a Cervical Smear check.

The intersection of oppressions that migrant women face in Ireland goes beyond visas. The Irish state dictates their reproductive rights more so than those of their Irish counterparts. Migrant women encounter greater barriers to accessing health services than Irish citizens: language issues, visa status and typically lower incomes are among the most common. These issues affect not only migrant women whose employers do not pay PRSI but also women who have never officially worked in the country, and are thus undocumented, and women living in Direct Provision. The current requirements for obtaining a PPS number depend on employers providing an authorisation letter, and things are even worse for migrants who are often employed informally.

On top of this, pregnant migrant women usually feel more vulnerable and more isolated, and many are not aware of their basic rights. According to Maternal Death Enquiry report (2015) migrant women accounted for 40 per cent of maternal deaths in Ireland though migrants make up at most 13 per cent of the population. Visa restrictions also impact on migrant women in crisis pregnancy. The 13th amendment to the Irish Constitution: The Right to Travel for Abortion Services discriminates against migrant women, most of whom cannot travel outside of the state without applying for re-entry visas, which can take weeks to be processed. Worse still, women in Direct Provision have their passports and travel documents taken from them and cannot leave the country at all.

For women migrants who have endured long years of visa restrictions and are finally entitled to apply for Irish citizenship, the situation is not as easy as one may think. Despite the popular belief that foreign nationals who marry Irish citizens are automatically entitled to citizenship, there is a long journey of paying PRSI and gathering many documents for at least three years, in order to prove that the migrant lives and works in Ireland, and did not leave the country for longer than six weeks. The Irish Citizenship fees of €1,125 excluding solicitors’ fees are an added burden. The waiting time can go up to 15 months, and the compulsory citizenship ceremony now takes place in faraway Killarney, which means that candidates not only have to pay the citizenship fees, but must also miss a working day or two and swallow the travel expenses. In my case train tickets sold out quickly, the city was shut down as the 3,500 candidates and their guests waited in the rain to enter the over-crowded venue. Once inside the venue, barriers strung together from chairs and duct tape; followed by patronising speeches that undercut the solemnity of the event with a bizarre country fair atmosphere made me think of the €3.9 million the state earns from this threadbare ceremony.

The speeches at the ceremony spoke about “the newest Irish citizens” and “becoming part of the Irish global family”. The utopian speech by Minister of State David Stanton mentioned “community, harmony, respect for cultural differences” so many times, simultaneously ignoring and emphasising the structural racism built into the immigration regime, the education system, employment rights, housing – all of which create many barriers for migrants.

As part of my obligations as an Irish citizen, I truly expected to be able to vote in the abortion referendum that took place four days after my citizenship ceremony. But despite completing the voting form in time, I could not vote because there was no space for the “New Irish” on the form/ In view of the fact that many Irish people living abroad for years were coming home to vote in the abortion referendum, so many migrant women living in and participating in the daily life in the state had no say. Migrant women, disproportionally affected by the 8th amendment, and due to structural and institutional racism, will probably continue to encounter additional difficulties accessing safe abortions in Ireland. Migrant and ethnic-minorities rarely get a say, they are marginalised and are often excluded from full participation in Irish society. I would have expected that the “newest Irish” would be included from the start of their citizenship, rather than whenever suits the state. The voting instructions that I received with my citizenship papers failed to mention the upcoming referendum, as it only provided basic information on how to register for elections.

A migrant from the Global South will always be asked whether “she is really Irish” as would be her Irish born children. There is an ingrained notion that Irish people should look “Irish,” that is white.
I am thankful to everyone in Ireland who received me with open arms but as we all know, there is no such a thing as a member of a family asking another “where are you really from?” There is still a long way towards achieving the utopian view of “integration” and “the Irish family” that we are told to expect from government integration plans founded upon seeing migrants, particularly non-white migrants, as inferior.

Jane Xavier is Brazilian living in Dublin since 2006. She is a social scientist involved in social justice activism related to domestic worker’s rights, anti-racism and reproductive rights. She is the Au Pair Rights Ireland chairperson, and a member of Migrant and Ethnic-Minorities for Reproductive Justice – MERJ, and works as a community support worker at Migrant Rights Centre Ireland.