REPORTS of racism in Ireland 2018 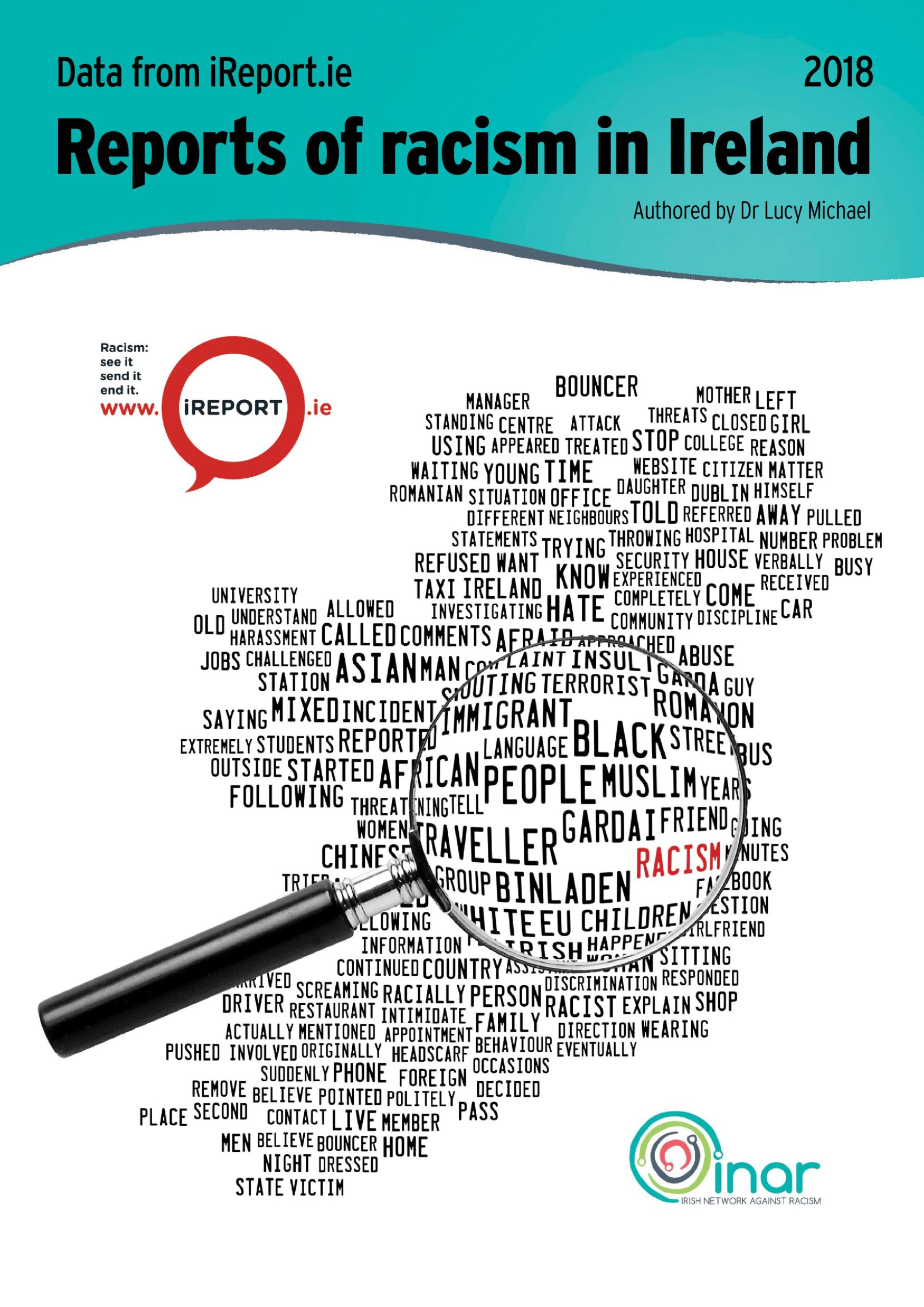 In 2018, Racism remained at the forefront of challenges facing Ireland, as the analysis contained in this INAR report, from its 6th year using iReport. ie data, once again demonstrates. This report also highlights the effects on the physical and mental health of those impacted by racism, as well as those around them. iReport.ie data continues to provide an authoritative source of data on Hate Crime and other manifestations of racism, and maintains the position of INAR as the ‘go to’ organisation for data, analysis and trends in Ireland. In addition to providing an ongoing clear picture of these interpersonal manifestations of racism, INAR’s (then ENAR Ireland’s) analysis of its data increasingly provides unique granular analyses of the responses to racism, giving a vivid snapshot of the institutional racism and wider human rights deficiencies within our institutions which create the context for racial violence and discrimination.

In 2018 iReport.ie data provided the evidence base for INAR’s Submission to the Commission on the Future of Policing in Ireland. This followed our 2017 submission to the Policing Authority, based on a 5-year review of iReport.ie data. In these reports, many of the instances cited had previously been published in the iReport.ie periodic reports, along with short narratives of the racist incidents and Garda responses themselves. Concerns were raised that would be raised again at further meetings with the Police Authority and later in interviews and correspondence with human rights researcher Alyson Kilpatrick BL, and which can be found reflected in the section on racist hate crime in A Human Rights-Based Approach to Policing in Ireland, published by the Irish Council for Civil Liberties (ICCL) in 2018.

As argued in the above submissions, INAR data support the 2004 finding of the Ionann Management Consultants report that An Garda Siocháná is institutionally racist. It’s worth bearing in mind that the MacPherson definition of institutional racism, in line with the UN CERD definition, stresses that institutional racism can exist irrespective of the intentions of police officers, but where there is a failure of an institutions systems to mitigate racist outcomes on members of impacted communities.

INAR’s data supports detailed findings in relation to failures with respect to international best practice standards in policing with respect to minority ethnic victims of racist crime, for example, INAR found patterns of:

Refusal to advise or act

Garda advises to victims of crime that:

Hostile interactions with ethnic minority public, and with victims

Being able to offer evidence-based criticism is one thing. These findings also demand recommendations for remedies at a legislative, policy and implementation level. Detailed recommendations are to be found in the submissions cited above, and were partially reflected in the Future of Policing in Ireland report, which the Policing Authority and An Garda Siocháná are now mandated to implement.

INAR’s growing expertise in this area has also brought it to engagement in novel research practice in the area of hate crime data communication. As part of the Facing Facts European level partnership on hate crime practice research, INAR co-hosted a collaborative research programme in Ireland where key personnel across Irish authorities, including from An Garda Siocháná, the Department of Justice, the office of the Director of Public Prosecutions, the Central Statistics Office, the Courts Service and Civil Society Organisations were invited to co-diagnose gaps in hate crime data practice, allowing for practical and implementable solutions to be recommended. The findings can be found in the innovative and interactive report, Connecting on Hate Crime Data in Ireland.

There were 390 reports received in 2018. Criminal offences excluding incitement to hatred constituted 103 reports. Discrimination accounted for 118 reports, and other recordable racist incidents accounted for 51 reports. There were 118 reports concerning hate speech. 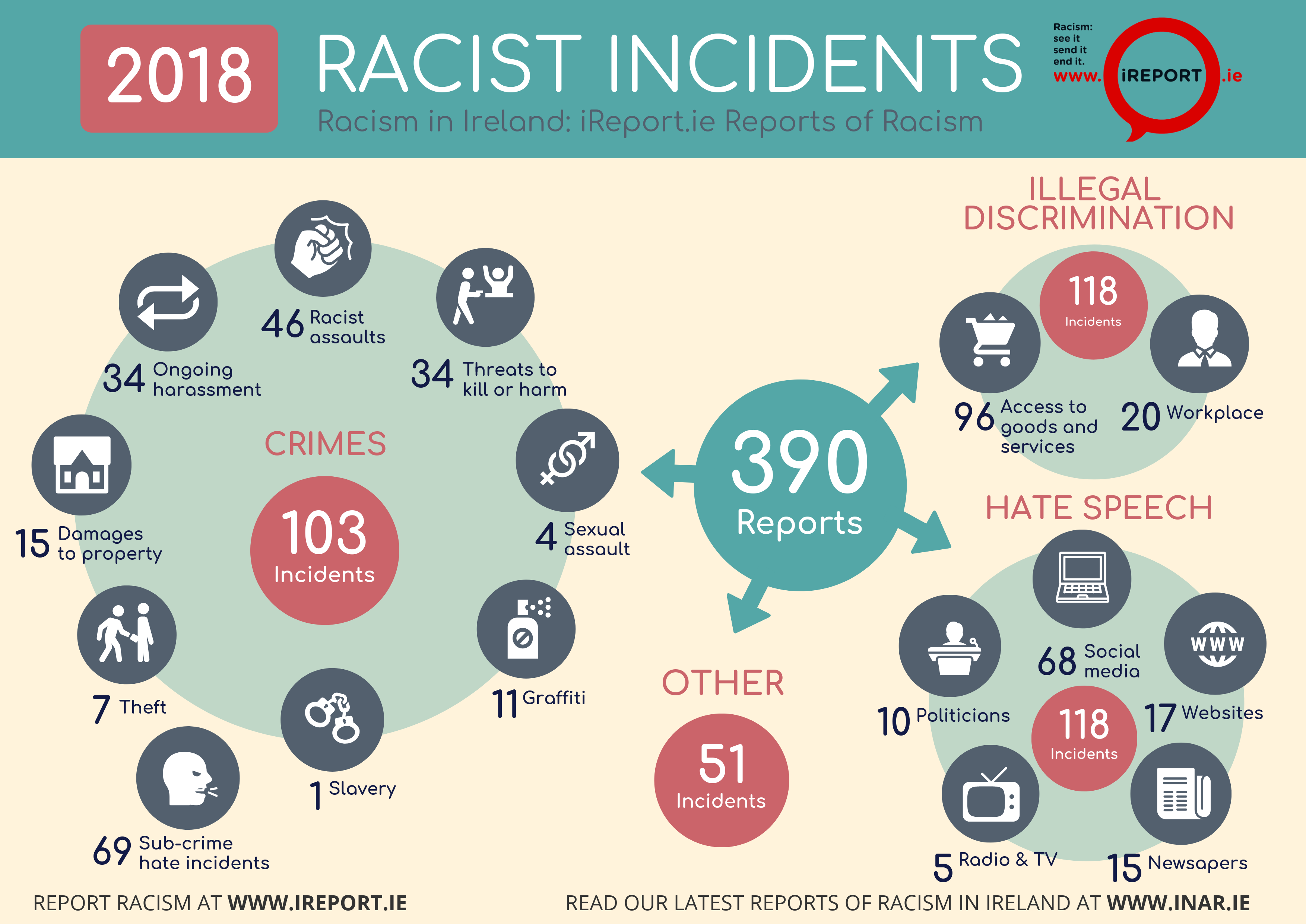 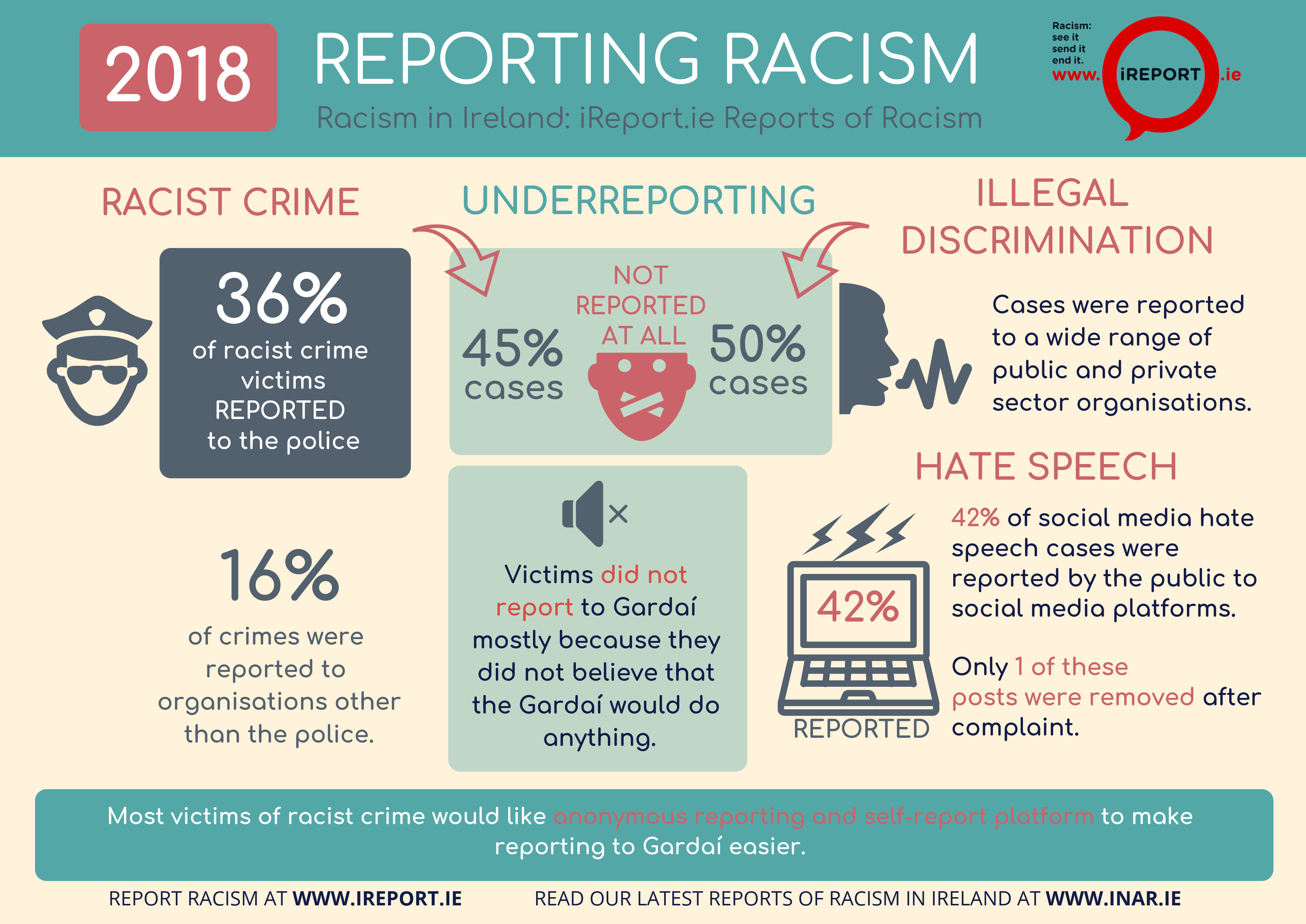 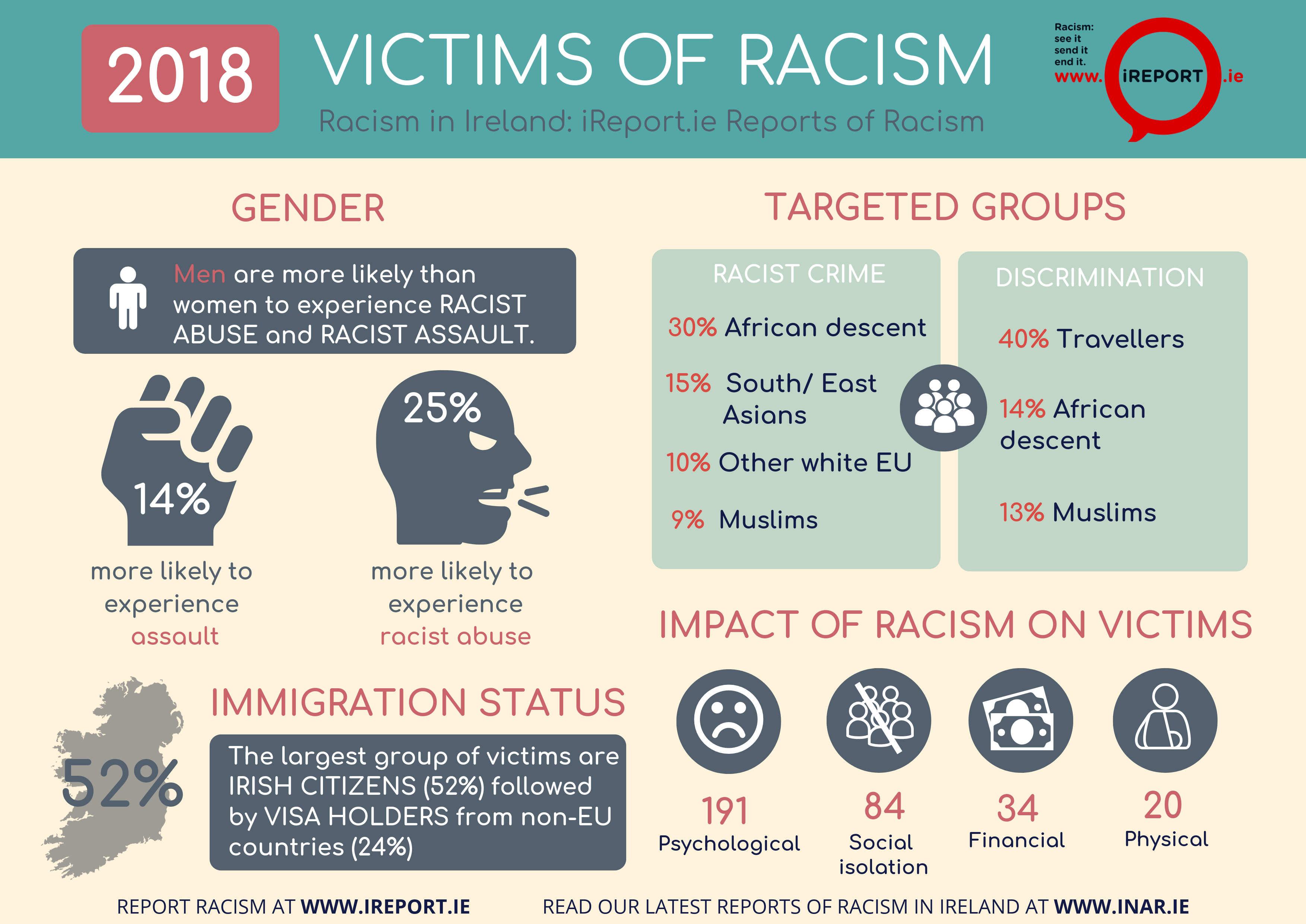 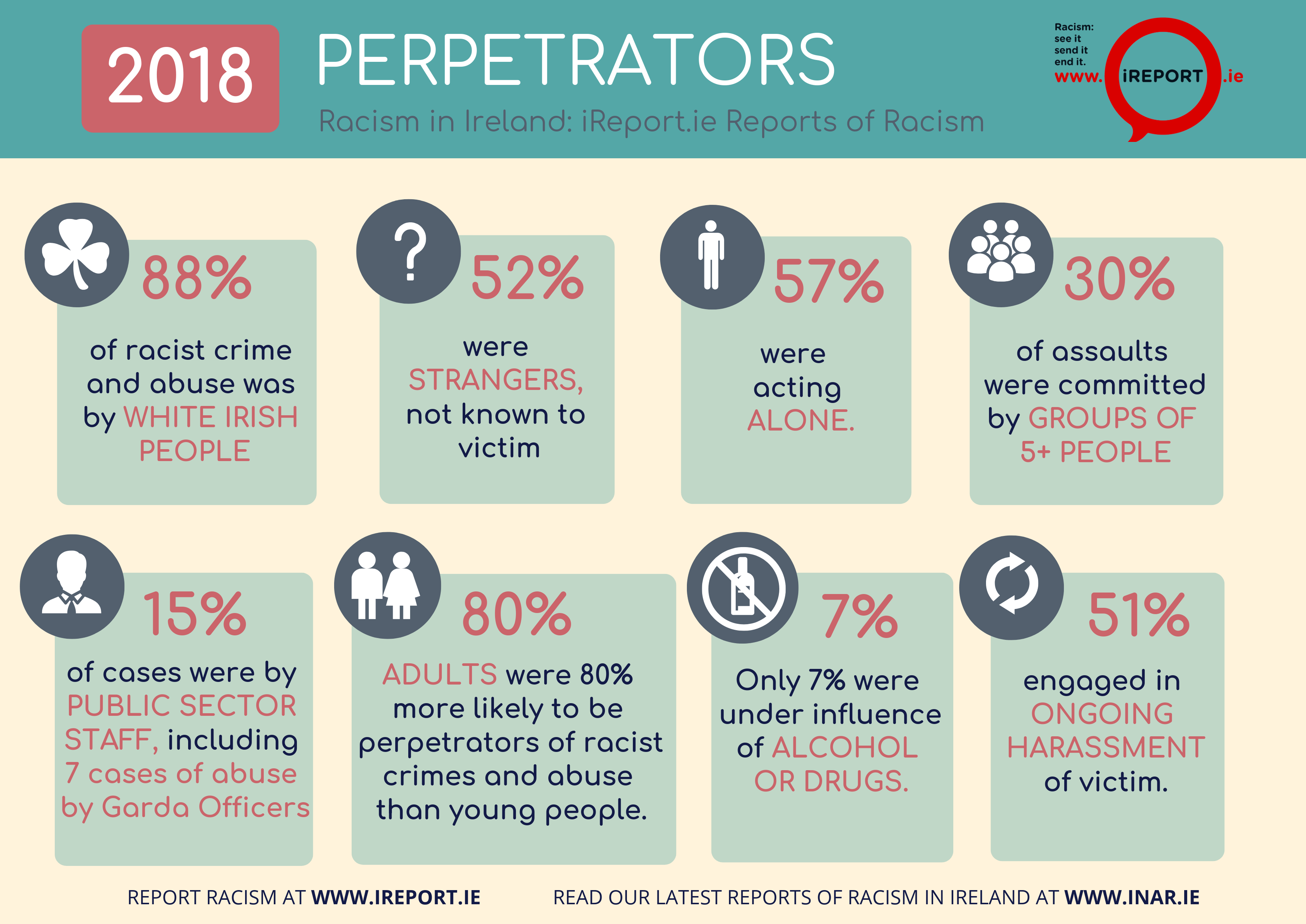