INAR sits on the Government’s advisory Anti-Racism Committee (ARC), appointed by Minister for Justice and Equality Charlie Flanagan and Minister of State David Staunton in June 2020, and convened in October 2020 by Roderic O’Gorman, Minister for Children, Equality, Disability, Integration and Youth. Since last year, the Committee has sat in full session 13 times, also working in smaller groups and additionally consulting with stakeholders and experts in preparation for a plan for public consultations. In November, the Committee made its Interim Report to Minister O’Gorman, which has now been approved by Cabinet and published. INAR is very pleased with the Interim Report, the fruit of much hard work and collaboration with colleagues on the Committee, and the Consultation plan that accompanies it. We are proud of the progressive language and framing of racism in these documents. We believe that, with enough resourcing and leadership from Government, these documents hold the promise of Ireland being able to develop an ambitious and far-reaching National Action Plan Against Racism (NAPAR). We urge our Government, now that it has taken the bold step of adopting this document, to follow through the consultation process and beyond in the elaboration and implementation of our next National Action Plan Against Racism, to make Ireland a progressive beacon in the world by becoming a proudly and purposefully anti-racist country.

The Anti-Racism Committee’s Public Consultation on a new National Action Plan against Racism for Ireland is now open and will run for 12 weeks from Wednesday 21 April to Wednesday 14 July 2021. 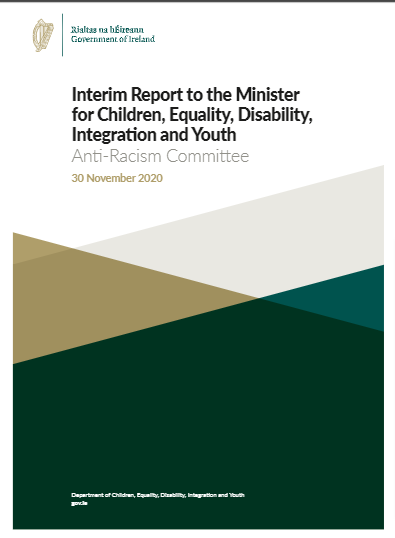 “We understand racism to mean ‘the power dynamics present in those structural and institutional arrangements, practices, policies and cultural norms, which have the effect of excluding or discriminating against individuals or groups, based on their identity, as outlined in Article 1 of the International Convention for the Elimination of Racial Discrimination (ICERD), which provides:

The EU Action Plan Against Racism 2020-2025 acknowledges the prevalence and impact of racism across the EU, and states:

We acknowledge the intersectionality between racism and all other forms of oppression, including the oppression experienced by people based on gender, sexuality, gender identity, disability and socio-economic circumstances. We further acknowledge that women, children and men experience dimensions of racism differently. The understanding we have adopted is a living one, building on international legal concepts and obligations as  well as relevant EU and Irish legislation and underscoring the importance of intersectionality, which will facilitate exploring coexisting identities and connected types of oppression related to gender, disability, etc. …”