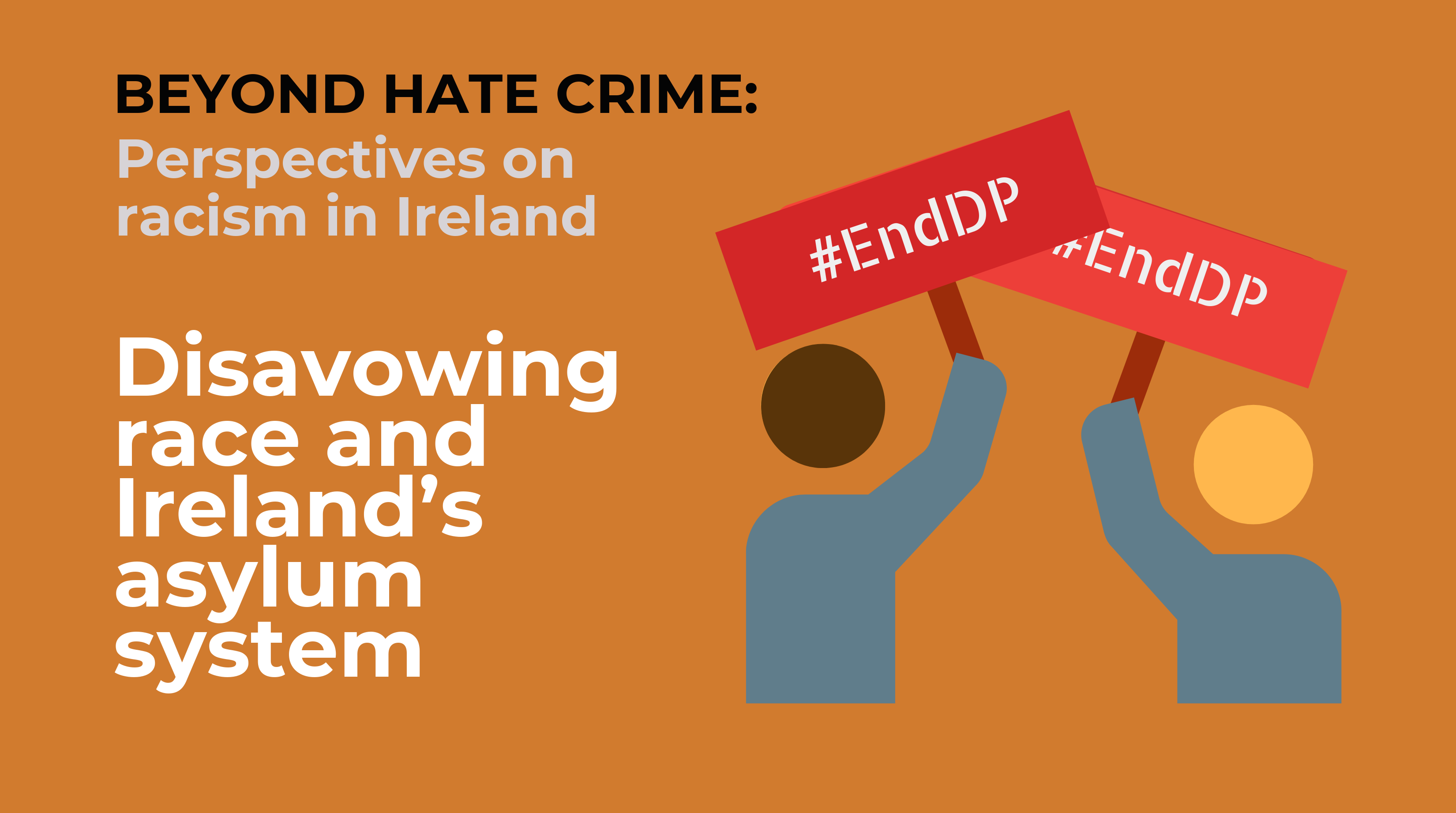 
I am moved by asylum seekers’ testimonies and by projects such as former asylum seeker Vukasin Nedeljkovic’s photographic Asylum Archive project, which documents the desolate lives of asylum seekers in remote sites throughout Ireland, hidden from view, to theorize the Direct Provision existence as “slow death,” which, as Lauren Berlant (2007: 759) argues, “does not describe specific individuals, but rather populations marked out for wearing out. In other words, slow death is not about an orientation towards the death drive but rather about the maintenance of the living, “a condition of being worn out by the activity of reproducing life.”
Isolated and racialized by the Irish racial state, asylum seekers, like the inmates of Ireland’s workhouses, psychiatric hospitals, industrial schools, Magdalene laundries and “mother and baby homes,” are perched at the edge of Irish life, and disavowed as Irish society manages not to know of their existence.
In 2002, in the first edited collection on racism and antiracism in Ireland (Lentin and McVeigh 2002), I argued that during the “Celtic Tiger” boom years Ireland’s vehement opposition to in-migration entailed a disavowal of the pain of emigration. The immigrant other represented the return of the repressed painful Irish experience of e/migration, known to every Irish family, but disavowed during the boom years. Denying that Irish people can be racist – having themselves been colonized and racialized by the British – and disavowing both the pain of emigration and the experiences of immigrants, Irish society was looking away, looking and not looking at the forbidden other, who represented what Irish people did not want to see, namely themselves, undressed.
Moving from 2002 to 2018 – with 19 years of Direct Provision, extremely low refugee acceptance rates, and a desperate housing and homelessness crisis – disavowal is again apparent. The familiar of poverty and emigration is returning to haunt Ireland’s collective consciousness, while making Irish people disavow, yet again, the plight of people seeking refuge in their midst. In the process the familiar becomes frightening, enabling the denial not of what “we” do not know, but of what “we” know only too well.
The protests by asylum seekers in Direct Provision since 2014 and the concerted campaign for the right to work by MASI, extensively reported by social and mainstream media, as well as various projects such as Nedljkovic’s Asylum Archive, make visible the plight of asylum seekers in Direct Provision, cut off from Irish society as many Irish people continue to choose to ignore and disavow the Direct Provision system.
Resistance, race, collective trauma
Coming up to Pope Francis’s Irish visit in August 2018, many Irish people demanded that the Pontiff acknowledge the abuse of countless Irish women and children incarcerated in church institutions and abused by priests and members of religious orders. Alternative “Nope to the Pope” and “Truth, Justice, Love” rallies staged at the same time as the papal mass, drawing thousands, including victims of church abuse and incarceration, indicated a society coming to term with its collective f trauma by speaking about the past and resisting its negative impact.
I was particularly struck by theatre director Grace Dyas narrating her encounter with the late Christine Buckley, who was incarcerated in the Sisters of Mercy’s Goldenbridge industrial school (and who featured in Louis Lentin’s 1996 documentary “Dear Daughter” for RTE, the first exposure of the widespread abuse which started the process of coming to terms).
A day after the Pope’s departure, another Dublin gathering made space for narratives of trauma and resistance when the Abbey Theatre brought together actors, musicians, dancers and residents of Ireland’s Direct Provision centres to share experiences and defy Ireland’s draconian immigration regime. The gathering, “Jimmy’s Hall Today” was an off shoot of the Abbey show “Jimmy’s Hall,” the story of the returned emigrant and community leader Jimmy Gralton who built a dance hall in his County Leitrim town. As the hall gained popularity, its free-spirited reputation drew the attention of the Catholic Church and local politicians who forced Jimmy to flee and the hall to close. Gralton was the only Irish citizen to be deported from Independent Ireland until the deportations in the 1990s of citizen children born in Ireland to migrant parents. In 2004, however, the citizenship entitlement to all people born in the island of Ireland was reversed by a Constitutional amendment that replaced the 83-year-old entitlement with granting citizenship only to children born in Ireland to citizen parents (Lentin and McVeigh 2006: 42-43).
The Abbey gathering was particularly poignant through the fact that one of the dancers, Pakistani nurse Vekash Khokhar, was to be deported immediately after the performance. Khokhar spoke to the audience, thanking Ireland for the time he spent there, saying he preferred to leave the country voluntarily ahead of his deportation to avoid facing potential detention as a deportee on his arrival in Pakistan. Ironically, Khokhar received a letter from the Irish National Immigration Service informing him that his asylum status was being reconsidered by the Department of Justice. So perhaps protests and political agitation do work after all.
So where does race come in?
Though denial and disavowal are no longer acceptable in a society continuing to look elsewhere, and thanks to the tireless work of victims of abuse and of asylum seekers and their supporters, one key issue remains disavowed.

Christine Buckley, a mixed race woman, the daughter of a Nigerian medical student and a white Irish woman, testified to being regularly called “black bastard” by the white Irish nuns. Buckley was one of 70 known mixed-race children who were taken into care in industrial schools because they were mixed race, whose shamed white Irish mothers felt the need to hide them from public view. They believe that there was a different unspoken “policy” for them, and that they suffered an “extra layer of abuse” because of their racial identity. Mixed race people who spent their childhoods in industrial schools have come together in the Mixed Race Irish campaign and support group. They say racism was endemic, systemic and systematic in the care system and in Irish society, and that their experiences were particular to them.
When one of them, Rosemary Adasser, the daughter of an African doctor and a white Irish woman, was admitted in 1958 as an 18-months old baby to a mother-and-baby home, her admission notes described her as “illegitimate and coloured”. Her mother had to leave the city to have her, such was the shame of being unmarried and pregnant by a black man. Fifteen years later, when she was pregnant and sent to another mother-and-baby home, they described her as “rather mature for her age; accepts her colour well.” Speaking of her experience, Adasser says: “My file is peppered with references to my colour. The racism was relentless and brutalizing. My formative years were devastated by it.” Like Buckley being called “black bastard” by the Mercy nuns, Adasser was called “blackie, nigger, golliwog, rubber lips, darkie” in the Kilkenny St Joseph industrial school.
Buckley’sand Adasser’s experiences of racial abuse epitomize the as yet unacknowledged experiences of many people racialized in Ireland’s systems of incarceration. However, just as race does not feature prominently in the survivors’ narratives of trauma, it is not central to the narration of the experiences of people in Direct Provision, probably because race is still taken to denote biological features rather than political processes. After all, though people in Direct Provision are not all black or brown, they are all racialized and dehumanized by state racism. As race scholar Alexander Weheliye (2014: 26) writes: “humans create race for the benefit of some and the detriment of other humans.” Race, remember, was created to preserve white supremacy.
My key argument then is that in addition to disavowing the enforced incarceration of Irish people in psychiatric establishments and clerical institutions in the past and the coerced incarceration of asylum seekers in present day Ireland, race represents a further level of disavowal. According to the Australian scholar Patrick Wolfe, race is a “process, not an ontology.” Wolfe describes race as “colonialism speaking in idioms whose diversity reflects the variety of unequal relationships,” and argues that “races are traces of history” (Wolfe 2016: 5). This is relevant in the case of Ireland that continued the history of British colonial incarceration of destitute poor Irish people during the Famine with incarcerating Irish people in church and state institutions, and asylum seekers in present day Ireland.
Yet the centrality of race is being denied and disguised through arguments of “common sense” immigration policies that include incarceration and deportation. However, as race scholar Alana Lentin (2017) argues, denying racism constitutes racist violence. This can be witnessed in definitions of racism that side-line or deny race as either a historical phenomenon no longer relevant, or as experienced by racialized people and therefore of secondary importance. That the racially dominant define what racism is has become central to its discussion in a variety of contexts. However, she argues,
the emphatic nature with which ‘not racism’ is declared today can be seen as the culmination of a protracted period of debate and denial. The current period, during which we are witnessing a deepening and expansion of systemic, state and popular racism against migrants and asylum seekers, the undocumented, Indigenous people, Muslims and Black people is, I suggest, accompanied by an ever more vigorous denial that these phenomena are racist.
Concurring with her that “the assertion of ‘not racism’ that accompanies many structurally white discussions of and pronouncements on matters of race is itself a key form of racist violence,” I argue that race must be theorized as the central tool of disavowing what Ireland’s white society wishes to deny and hide from view. In the case of the incarceration of asylum seekers in Direct Provision, the very disavowal of race denotes nothing less than racist violence.

Ronit Lentin is a political sociologist, writer, activist and former Associate Professor of Sociology in Trinity College Dublin. Her books include After Optimism: Ireland, Racism and Globalisation (2006, with Robbie McVeigh), Race and State (2006/2008, with Alana Lentin), Thinking Palestine (2008), Co-Memory and Melancholia: Israelis Memorializing the Palestinian Nakba (2010/2014), Migrant Activism and Integration from Below (2012, with Elena Moreo), and Traces of Racial Exception: Racializing Israeli Settler Colonialism (2018).