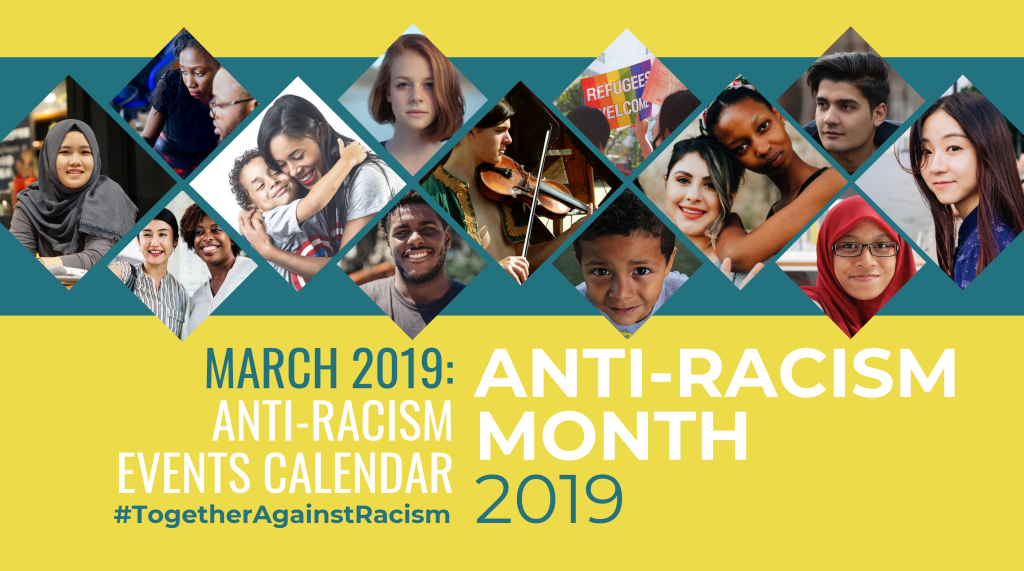 Every year March is an important month for both Irish and global Anti-Racism Movements due to various international celebrations focusing on combating racism and celebrating diversity taking place.

21 st March marks an important day in every anti-racist’s calendar.  On that day in 1960, the Apartheid regime’s police opened fire and killed 69 Black people at a peaceful demonstration for equality and against apartheid laws in Sharpeville, South Africa. This date has since been declared the International Day for the Elimination of Racial Discrimination when the people across the globe show their opposition to racism and solidarity with those affected by it and in remembrance of the harmful impact of racism on individuals and communities.  In 2019 the focus is on mitigating and countering rising nationalist populism and extreme supremacist ideologies.

The week of 16-24 March is the European Action Week Against Racism celebrated in 2019 under the slogan ‘It’s Time to Be United’. Additionally to the above dates, the week following 21st March marks the UN Week of Solidarity with the People Struggling against Racism and Racial Discrimination.

During those upcoming days and weeks thousands of people, not just in Ireland, but all across the EU and the globe will come together to promote and celebrate equal rights and diversity. INAR and our Network Members will coordinate and celebrate not only these important dates but over a month full of anti-racism and intercultural events and activities between the 1st of March and the 8th of April. Check out what’s happening in your area in the below Events Calendar and join the event near you.

Use hashtags: #ARM19 and #TogetherAgainstRacism .

TELL US ABOUT YOUR EVENT!

If you wish to add your event contact Aga at aga@inar.ie with the following details:

Clondalkin Towers DP residents are facing the possibility of homelessness as uncertainty remains surrounding the future of the Towers. JRS and the Peter McVerry Trust are committed to sourcing suitable accommodation for those residents with status. If you or your organization have a suitable property that could accommodate a family or individual please do not hesitate to get in touch.

The articles collected in this journal aim to close the gap in understanding race and racism in the Irish context, beyond the limited understanding of racism as hate crimes. Articles go from the theoretical (Alana Lentin’s article on expanding the meaning of race beyond social construction), to the conceptual (Robbie McVeigh’s article on the origins of the term “hate crimes” in FBI terminology, and Ronit Lantin’s article on the erasure of race in conceptualizing direct provision and its historical antecedents), to specific case studies (Ebun Joseph on whiteness in the Irish labour market, Jane Xavier on the racialized experiences of migrant women, Karl Kitchin’s article on racism in the Irish education system, and Eugenia Siapera and her colleagues’ article on acts of race talk in online Irish websites).

We hope the collection inspires readers to re-think the meaning of race and racism in the Irish context and look forward to your comment.

We will be publishing below articles between 4th March and 8th April as a part of the Anti-Racism Month 2019. Please refer to the date beside the article to find out its release date.

It takes a community to resettle a family and it takes a family to make a community. Home from Home D6 is a local community sponsorship scheme for refugees coming to Ireland.  Come to this meeting to find out more and to learn how you can support. Whoever you are, whatever your skills, age and experience, refugees need friends like you to plan and prepare for their arrival. Guest speakers include Eve Leonard (Migration Programme Manager, Irish Red Cross) and Major Nick Coke (Refugee Response Coordinator, The Salvation Army)

BREXIT, THE BORDER AND RACISM
Panel discussion. The prospect of Brexit is already the source of anxiety for the majority of communities on both sides of the Irish border. But what of the minorities? What will the impact of Brexit and a hardened border be for migrants and other minorities on either side of the border?
Join us for a conversation where in the first half Dr Ebun Joseph responds to research findings on Brexit and its impacts on minorities outlined by panellists Luke Butterly, Dr Chris Gilligan and Dr Lucy Michael. The discussion will be chaired by Dr Ronit Lentin.
Organisers: INAR and Ulster University
Time and location: 7:30pm, Cobblestone Pub Back Room, 77 North King Street, Dublin 7
Contact: info@inar.ie

In honour of International Women’s Day 2019, NCP Dublin will be hosting a morning of relaxation and rejuvenation for migrant women. including mediation and relaxation session with a trained professional, followed by an open discussion on current women’s issues.

In honour of International Women’s Day 2019, NCP Cork, together with the Community Foundation for Ireland, will be holding a talk entitled Domestic Abuse and its Effects on Migrant Women in Ireland. The event will bring together women of all ethnicities and backgrounds for a full and honest discussion about what domestic abuse is, what can be done to tackle it, and how it specifically affects migrant women.

We will be retweeting and reposting all photos with the hashtag and they will all be published in a dedicated Facebook album on 21st March. At the end of the action, we will make a photo collage of all the images we receive.

INAR is inviting political representatives to demonstrate and renew their commitment to anti-racism by signing this updated declaration as an indication of their support and endorsement of the Protocol. Senator Colette Kelleher will host the re-launch of INAR’s Anti-Racism Election Protocol in the AV Room in Leinster House. The launch is being held on the International Day for the Elimination of Racial Discrimination, which this year focuses on mitigating and countering rising nationalist populism and extreme supremacist ideologies. It has particular relevance in the context of the increase in racist discourse and the rise of xenophobic populism in Ireland and globally. We hope with this protocol to help keep the May 24 local and European elections free from the kind of toxic discourse that misinforms voters and debases political debate.

GTM is inviting all candidates who are running in the 2019 Local Elections to publicly sign up to the Irish Network Against Racism’s anti-racism election protocol. They’ll be asked to pledge their support to protect the Traveller community against any racist or discriminatory comments made during the local election campaign and also to show their public support for progressing equality outcomes for members of the Traveller community.
Organiser: Galway Traveller Network
Time and location: 12 -1pm, GTM’s offices, 1 The Plaza, Headford Road
Contact: Click the link above

Cultúr holds an event with guest speakers, food from around the world and information stands to bring the community of Navan together, to be united against racism.
Organiser: Cultúr
Time and location: 11am – 3pm, Parish Hall, St. Ann’s resource centre, Navan Co. Meath.
Contact: sandra@cultur.ie

The Kurdish community invite the people of Wexford to a cultural event that will explore the language, food, history and traditions of the Kurdish people. The aim of this event is to introduce the wider community in Wexford to their Kurdish neighbours, who recently arrived under the Refugee Resettlement programme.
Organiser: Doras Luimní
Time and location: Thursday 21st March 2019, 5:30pm, Gorey Library
Contact: m.moussa@dorasluimni.org

LAOIS AS A PLACE OF SANCTUARY AND WELCOME

This event is an opportunity to discuss positive ascents of living in Laois as well as hear from speakers talk about topics including voter awareness, racism reporting and how to get involved in initiatives to promote integration. Speakers to include Sergeant David McInerney – Garda National Diversity and Inclusion Unit, Tiffy Allen – Place of Sanctuary Ireland, Salome Mgugua – AkiDwA and Ken Mc Cue – Sport Against Racism Ireland (SARI). Free event. Tea/coffee and Moroccan themed lunch will be provided.

LUNCHTIME DISCUSSION PANEL TO MARK UNDERD
You are warmly invited to a lunchtime talk to mark the United Nation’s International Day for the Elimination of All Forms of Racial Discrimination (UNDERD) with guest speakers: Jude Hughes, Association of Mixed Race Ireland  Dr Ebun Joseph, the Chairperson of the African Scholars Association Ireland, Kelvin Akpaloo, director of the Streets Arts Academy programme and Choreographer for WAVE Intercultural Youth Arts Project and Edwina Steele, Dept of Justice, Office for the Promotion of Migrant Integration. This panel discussion will be followed by Q&A. A sandwich lunch will be provided from 12:30.
Organiser: Equality and Diversity Working Group, Department of Foreign Affairs & Trade
Time and location: 12.30 to 14.30 in the Ballroom of Iveagh House. Department of Foreign Affairs and Trade, 80 St Stephen’s Green, Dublin 2.
Contact: Winifred.ikhineakinyemi@dfa.ie

BE HEARD
IHREC youth consultation for 16-24yr olds on how to end racial discrimination. The findings will feed into the IHREC UNCERD shadow report.
Organiser: The National Youth Council of Ireland (NYCI) in collaboration with the Irish Human Rights and Equality Commission (IHREC)
Time and location: 10.00 – 4.30 with workshops following the formal consultation 4.45 – 6.30; Gresham Hotel, O’Connell St, Dublin 1
Contact: anne@nyci.ie

LAUNCH OF ‘RESPONDING TO RACISM GUIDE: HOW TO REPORT RACISM AND WHERE TO FIND HELP’ PUBLICATION AND TRAINING
INAR’s ‘Responding to Racism Guide: How to report racism and where to find help’ and the training based on the Guide will be launched by the Minister for Equality, Immigration, and Integration, David Stanton. The guide is designed as a supplement to the iReport.ie system of recording and monitoring racist incidents in Ireland. It is primarily a guide for following up on incidents by someone who has experienced or witnessed racism, and/or those supporting them. This guide provides information about how and where to report racist incidents, including racist discrimination, racist crimes and hate speech online, as well as how to go about finding redress and how to use existing legislation to address racism.
The launch of the publication will be open for everyone and will be followed by the training session for INAR Members, leaders of Minority Ethnic communities and especially those organisations who already are or wish to become iReport.ie Racism Reporting Centres. Training is available by registration only as the number of places is limited.
Please note you must register for the training separately to book your place.
Organiser: INAR
Time and location: Guide launch: 10:00-11:30 am, followed by Training: 12:00-4:30pm; Dublin City Centre venue TBA soon
Contact: aga@inar.ie Register here for the LAUNCH   Register here for the TRAINING