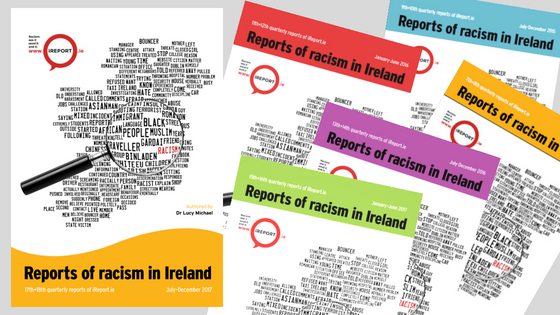 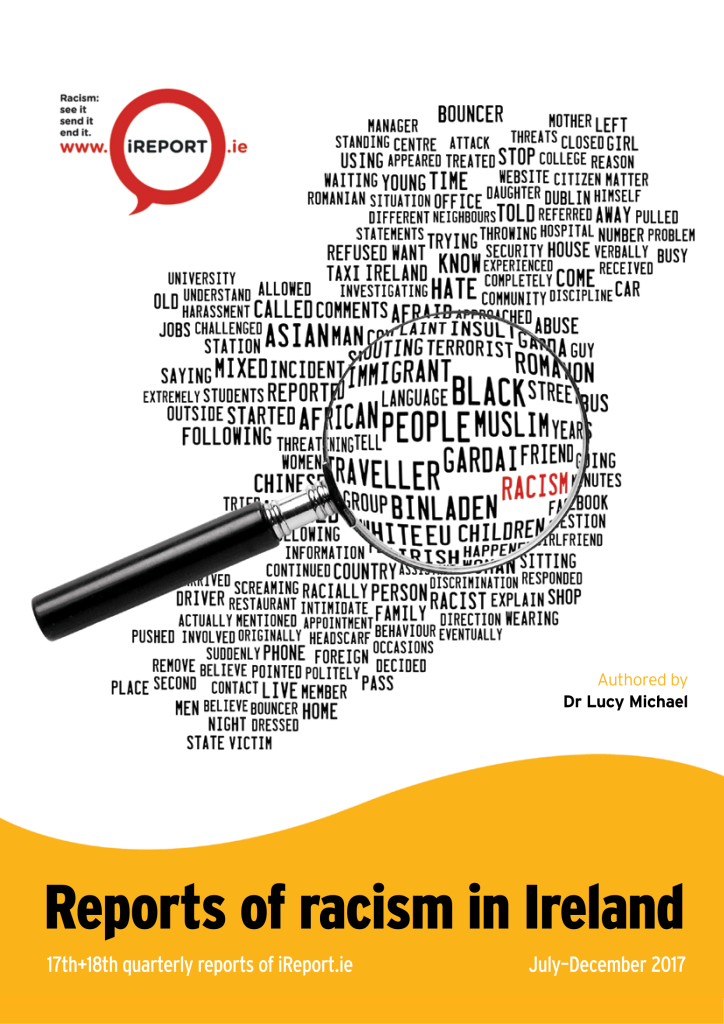 The analysis in this, INAR’s iReport and 14th publication using iReport.ie data, once again demonstrates the remarkable consistency and reliability of the iReport.ie system in providing an authoritative source of data on hate crime and other manifestations of racism, in the context of massive State deficiencies in this area. Since INAR and its national membership teamed up with Ulster University’s Dr Lucy Michael in August 2013 to launch what is now established as the only national racist incident and hate crime reporting system covering incidents which target all ethnic minorities, we have been able to develop the iReport.ie system into an internationally respected model of best practice. In Ireland, we are now increasingly using iReport.ie data to move beyond the monitoring of hate crime itself to highlight the institutional racism and wider human rights deficiencies within our institutions which can create a context for racial violence to occur. (In our forthcoming blog, curated by Dr Ronit Lentin, we invite writers from a range of experiences and foregrounding those from minority backgrounds, to share contributions which further challenge narrow understandings of racism by placing it in wider institutional and structural contexts.)
The iReport.ie system continues to generate widespread interest because of its usefulness and versatility as a human rights tool. For example, using Dr Michael’s analysis of the iReport.ie data, the OSCE’s Office for Democratic Institutions and Human Rights (ODIHR) are able to report more robustly on hate crime in Ireland than by using data from any other source, including State data. Among Civil Society and Intergovernmental Organisations alike, the iReport.ie system also continues to be cited as a model of best practice, while it also arouses considerable interest from organisations ranging from national authorities to grassroots, minority-led organisations. The system is regularly and widely showcased among our fellow members of the European Network Against Racism, and the expertise we have gained managing the project has positioned us as key partners in a number of trans-European projects. Our partnership in the Facing All The Facts programme, developing next-generation training tools for police and prosecutors on hate crime, and identifying systems gaps in police and criminal justice system data recording and communication, positions us to go beyond our evidence-based advocacy for hate crime legislation, to utilising the iReport.ie data to highlight broader human rights failures in policing in Ireland, as well as key institutional failures to mitigate racism in wider Irish society.
In two of our recent submissions, to the Commission on The Future of Policing in Ireland, and to the Policing Authority, we used analysis of iReport.ie data to effectively highlight systemic failings in Garda responses, focusing on failures to respond to repeat harassment or to more broadly recognise and respond to the impacts on all of our communities of racialised violence and crimes. In a more recent meeting with the Policing Authority, we highlighted three extremely alarming allegations of serious physical abuse of people from ethnic minority backgrounds at the hands of members of An Garda Síochána, dating from early 2018, which we could show had arisen because of these failings. In the Irish Council for Civil Liberties’ recently launched report on Human Rights Based Policing in Ireland, the author, human rights barrister Alyson Kilpatrick, draws heavily on the iReport.ie analysis in their very substantial chapter on hate crime, with clear recommendations for extensive institutional and policy change.
If properly implemented, the ICCL’s recommendations on hate crime and other human rights aspects of policing could make a fundamental difference to the lives of minority and majority communities, as well as to the legitimacy and functioning of our police service. So too would the proper implementation of the recommendations of the recently published Commission on the Future of Policing in Ireland. But Ireland has no shortage of reports and recommendations for change in the areas of policing and of human rights and inclusion, from the Morris Tribunal recommendations to the Public Sector Duty enshrined in the 2014 Irish Human Rights and Equality Commission Act.
There is hope that impetus for the substantial change needed may come in the form of long-awaited hate crime legislation – which the National Steering Group on Hate Crime, co-ordinated by INAR, is working hard to achieve, and which is the subject of the European Parliament’s PETI Commission’s current investigation into Ireland’s compliance with the 2008 Framework Decision on Racism and Xenophobia. Others are hopeful that the new Garda Commissioner Drew Harris, formerly the UK Association of Chief Police Officers’ policy lead on Hate Crime, will be given the wherewithal to drive the changes needed to tackle institutional racism and reshape An Garda Síochána into a service that can deliver human rights-based policing. We will continue to use iReport.ie to monitor change in policing in Ireland.
Shane O’Curry
Read the full Q17 & Q18 iReport Reports of Racism in Ireland here.
Read the press release here.
Click to access previous Reports of Racism in Ireland. 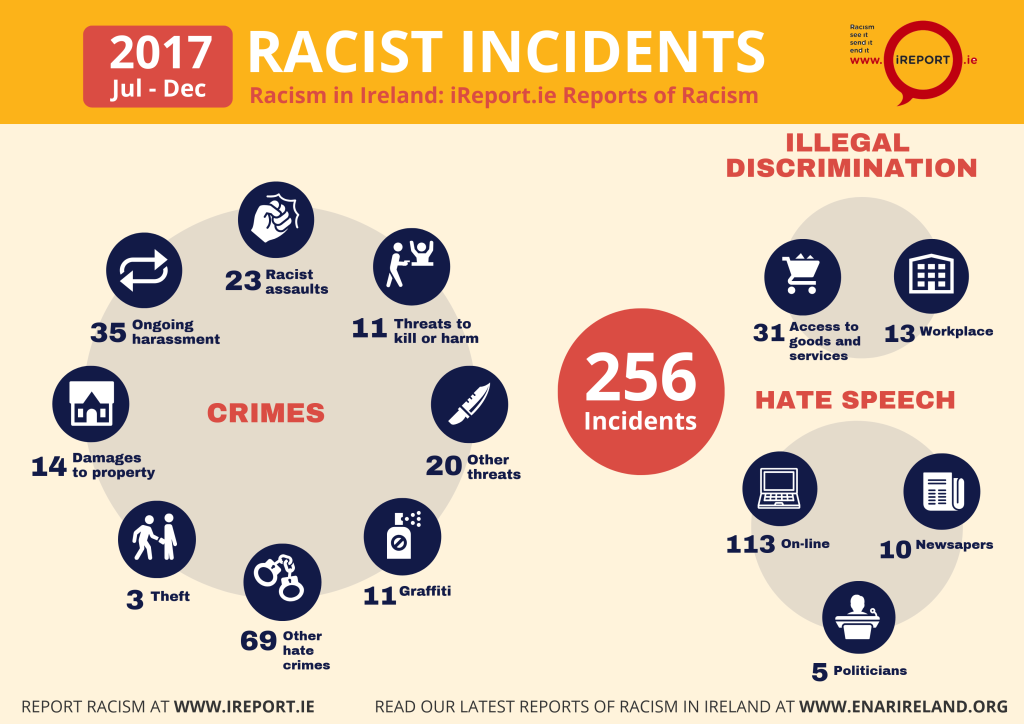 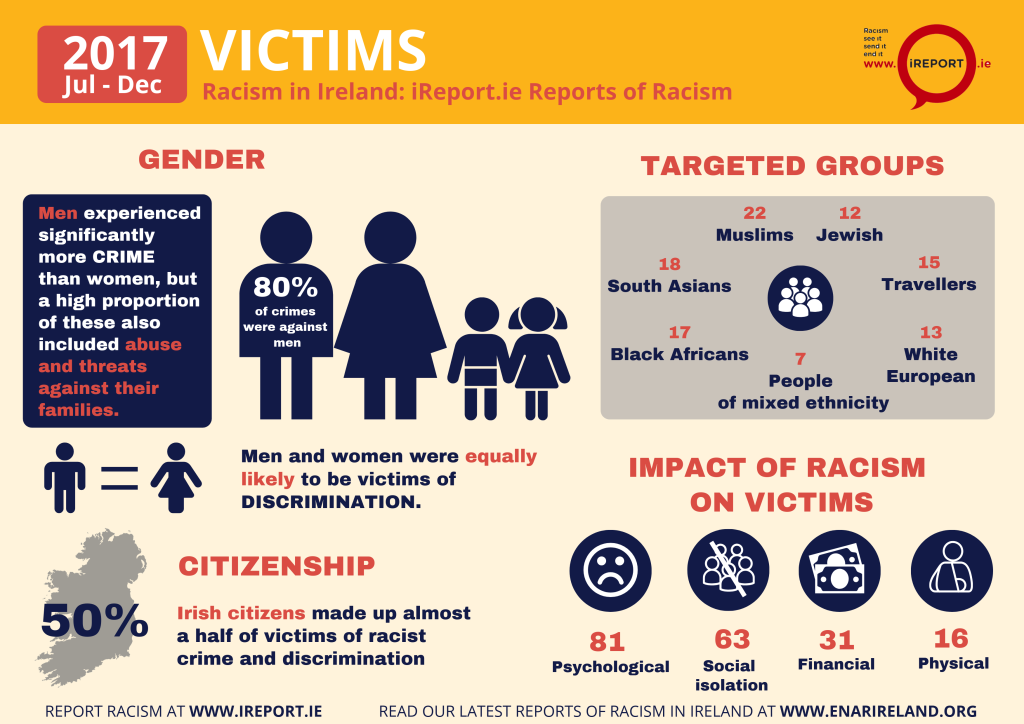 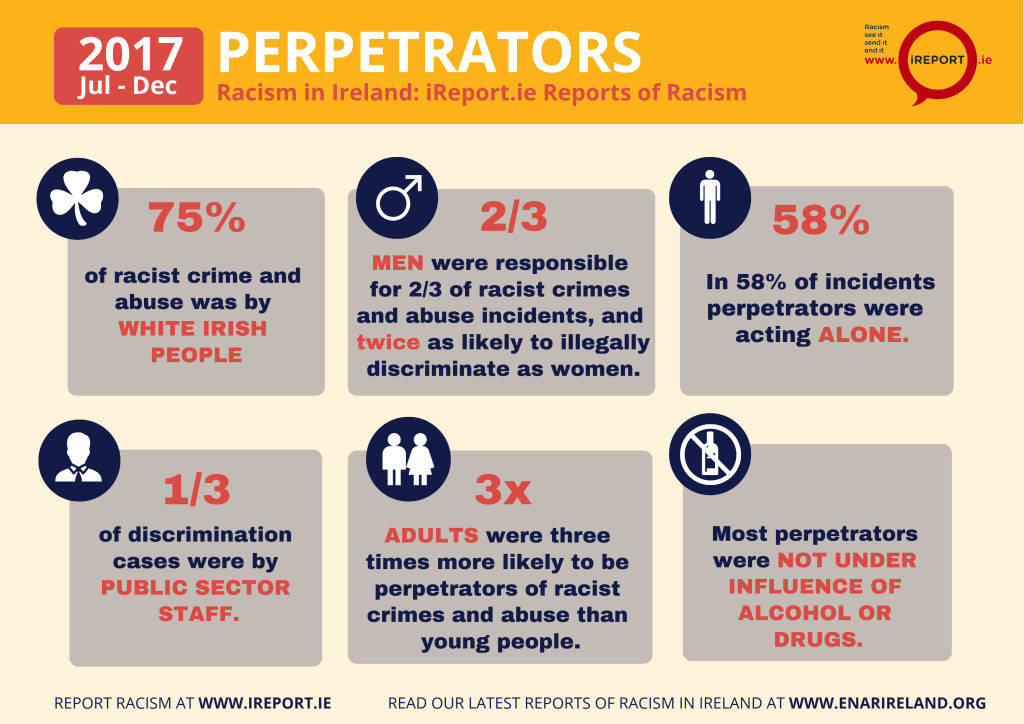 Racism in Ireland July – December 2017: Perpetrators. Click and scroll down to enlarge 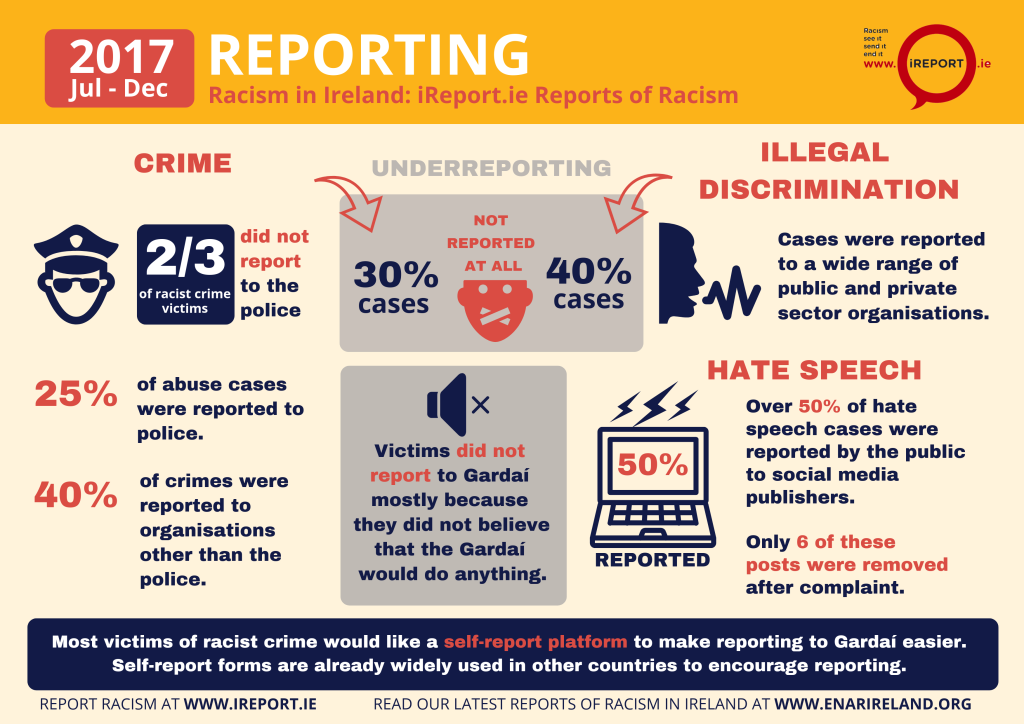 Racism in Ireland July – December 2017: Reporting. Click and scroll down to enlarge